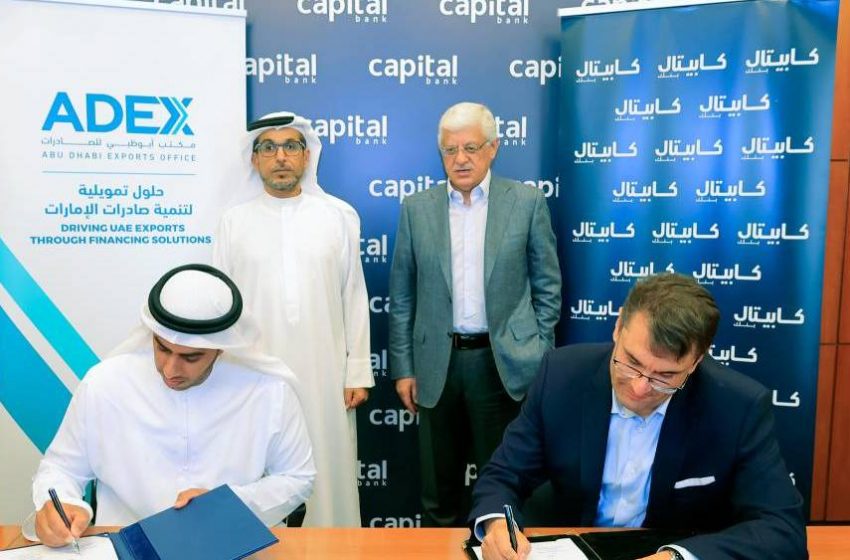 Abu Dhabi Exports Office (ADEX), an affiliate of the Abu Dhabi Fund for Development (ADFD) has signed an agreement with the Capital Bank in Jordan for opening a credit line worth $20 million.

The agreement is expected to enhance the economic activity of the two countries and support joint efforts to develop the UAE’s foreign trade movement with the countries of the region. The agreement contributes to establishing additional credit lines to facilitate joint financing operations, in an effort to support UAE exports and enhance its presence in the Jordanian markets.

The signing was attended by Mohammed Saif Al-Suwaidi, Director General of the Abu Dhabi Fund for Development, Chairman of the Executive Committee for Exports, Basem Khalil Al-Salem, Chairman of the Board of Directors of Capital Bank Group, and several other officials.

The ceremony took place at the bank’s headquarters in Jordan and graced by Khalil Fadel Al-Mansoori, Acting Director General of the Abu Dhabi Export Office, and Daoud Al-Ghoul, CEO of Capital Bank.

In his comments, Mohammed Saif Al-Suwaidi said: “At the ADEX, we seek to target new regional and global markets characterized by a growing and promising economy. Including the Jordanian market. The agreement also contributes to enhancing strategic integration for the development of the export sector in a way that achieves the common interests of both parties.”

Bassem Khalil Al-Salem said the agreement was an important step that will develop relations between the two sides in various fields, and contribute to strengthening the movement of trade exchange and reviving economic growth for the two countries. Supports the achievement of sustainable development.

Khalil Fadel Al Mansouri said: “This agreement constitutes a new economic stage that supports the development of national exports, enhances the development of trade relations between the two sides, and provides opportunities for Emirati companies to expand geographically and access strategic regional and global markets, which contributes to achieving the country’s policies that support diversification and sustainable economy.”

He further added: “Abu Dhabi Exports will open a credit line with Capital Bank with the aim of re-lending it to buyers and importers to purchase goods and services from an Emirati exporter on favourable terms and competitive advantages.”

Daoud Al-Ghoul said: “Through the agreement, we will provide additional financing services at preferential prices to our corporate clients in order to support their commercial dealings with the United Arab Emirates. and Emirati products in easy and safe ways.”