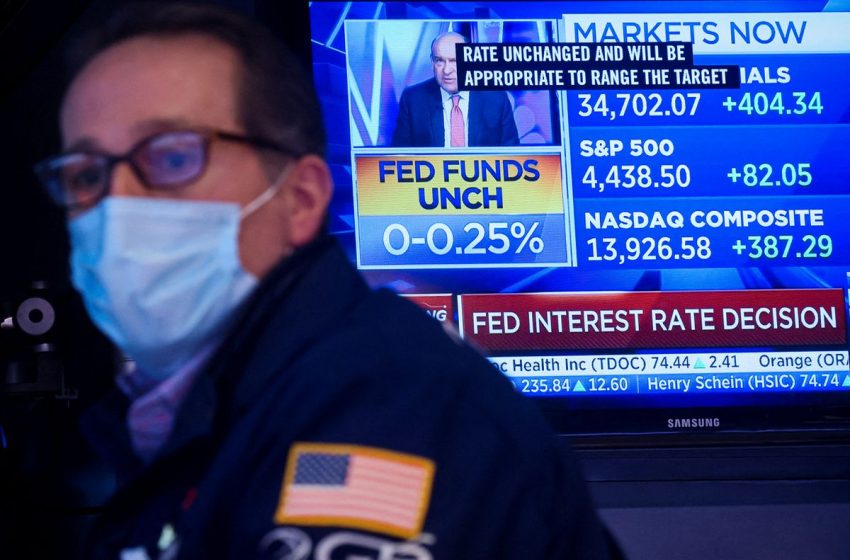 U.S. short-term government bond yields rocketed to their highest in 23 months after the Fed stuck to plans for a rate hike in March and Chair Jerome Powell warned that inflation may be more persistent than previously thought. read more

Fed funds futures showed traders pricing in as many as five rate increases by December, after previously fully pricing for four.

Adding to investor concerns were festering geopolitical tensions in Ukraine. The U.S. said on Wednesday it faced challenges in finding alternative energy sources to Europe if Russia invades Ukraine and energy flows from Russia are interrupted. read more

The S&P 500 index nosedived in the previous session reversing all its early gains amid volatile trading, flirting with a correction for its third straight session.

The bellwether index would have to close 10% or more below its record closing high reached on Jan. 3, to confirm it entered correction territory. It ended the session 9.3% below that level on Wednesday.

Investors are also keeping an eye out for data due at 08:30 a.m. ET that is expected to show U.S. economic growth likely accelerated in the fourth quarter as businesses replenished depleted inventories to meet strong demand for goods. read more

Some are worried that a more hawkish Fed could hurt recovery, even theorizing a sharp economic slowdown or even the next recession. read more

Meanwhile, the fourth-quarter earnings season is in full swing with analysts expecting earnings from S&P 500 companies to grow 24.4% year-over-year, according to Refinitiv, as of Wednesday.