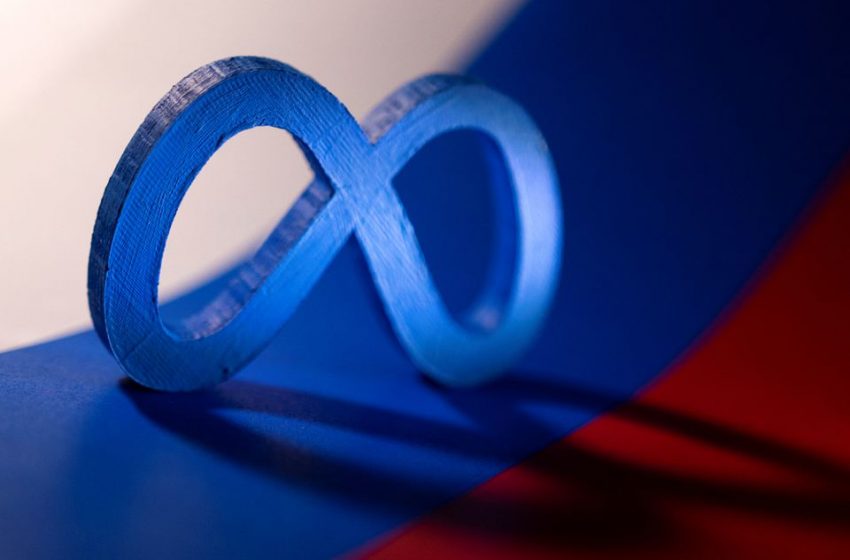 Meta logo is placed on a Russian flag in this illustration taken February 26, 2022. REUTERS/Dado Ruvic/Illustration

As Russian missiles rained down on Ukrainian cities, another battle took place online and over the airwaves.

Moscow ramped up efforts to control the narrative playing out in news media and on tech platforms, while big tech companies Facebook-owner Meta Platforms Inc (FB.O) and Alphabet Inc’s (GOOGL.O) Google put restrictions on Russia’s state-controlled media outlets in Ukraine and around the world.

On Friday, Russia said it would partially restrict Facebook, a move Meta said came after it refused a government request to stop the independent fact-checking of several Russian state media outlets. By Saturday, Twitter also said its service was being restricted for some Russian users.

Images and videos were slower to load on Facebook after the slowdown was announced, according to users, while Facebook Messenger had long periods of not loading at all. On mobile devices, Twitter remained slow – it has been the subject of a punitive slowdown since March. Many state websites, including the Kremlin site kremlin.ru, have also suffered outages in recent days.

For the tech companies, the stand-off is the latest step in an ongoing confrontation with Russia where platforms risk government-imposed restrictions in the country as it seeks to censor dissidents while protecting state-run media.

Major social, video and livestreaming platforms from Facebook to TikTok and Twitch are coming under increasing pressure to combat falsehoods on their platforms relating to the conflict, including the spread of misleading footage.

The escalation of Russia’s clash with big tech comes days before a deadline Moscow set for major foreign tech companies to comply with a new law that requires them to set up official representation in the country, which could make it easier for the Kremlin to regulate platforms. It follows a series of fines and slowdowns imposed on platforms which the Russian government said failed to remove illegal content. read more

Ahead of the March deadline, an online list by Russia’s communications regulator Roskomnadzor showed only Apple (AAPL.O), Spotify (SPOT.N) and Viber had fulfilled all three requirements of the law as of 2145 GMT on Sunday. They are: registering an account with the regulator, giving users a way to communicate directly with the company, and setting up a representative office.

This month, Russia threatened the companies with an advertising ban if they do not comply. Harsher restrictions that could follow include speed slowdowns or outright blocks, Russian officials have said.

Big tech companies also face the burden of weighing demands from Ukrainian officials and sympathizers worldwide who have called on them to expel Russian users from their services to stop the spread of false information, while also preserving the access of dissidents to vital digital tools.

“Mark Zuckerberg, while you create Metaverse – Russia ruins real life in Ukraine! We ask you to ban access to @facebookapp and @instagram from Russia – as long as tanks and missiles attack our kindergartens and hospitals!” Ukrainian Vice Prime Minister Mykhailo Fedorov wrote on Twitter on Sunday.

Responding to the demands, Meta’s head of global affairs Nick Clegg tweeted on Sunday that turning off Facebook and Instagram in Russia would “silence important expression at a crucial time.”

It was clear others across the tech landscape were grappling with similar dilemmas. Just minutes after saying in a post on Sunday that the Telegram messaging app would consider restricting some channels for spreading false information, founder Pavel Durov said the company would no longer do so after receiving feedback from users.

The activities of state-controlled media such as RT and Sputnik, which were hit with new EU sanctions on Sunday, has been a key source of conflict between Moscow and major tech platforms, as activists and politicians demanded the companies demonetize or ban the Kremlin-sponsored outlets. read more

Roskomnadzor has warned local media not to circulate what it called “false information” about Moscow’s military operation, banning the use of the words “invasion” and “assault” to describe its attack on Ukraine. Russian tech giant Yandex (YNDX.O) has also started warning Russian users looking for news about Ukraine on its search engine about unreliable information on the internet.

Russia calls its actions a “special operation” that it says is not designed to occupy territory but to destroy Ukraine’s military capabilities and capture individuals who it sees as dangerous nationalists – something the government in Kyiv and Western powers say is baseless propaganda. read more State-run media has long been a contentious presence on major social platforms, some of which label those accounts in an effort to be more transparent about the source of information.

Amid Russia’s invasion, Facebook, Twitter, Google and its video streaming service YouTube took new measures to restrict Russian state media from making money from ads on their sites. Twitter, which banned ads from state-backed media in 2019, said it was pausing all ads in Russia and Ukraine to ensure the visibility of public safety information. Google, the world’s biggest ad seller, also said it was not allowing Russian state media to sell ads using its tools.

Facebook and Google also said they had restricted access to some state media accounts in Ukraine at the request of the Ukrainian government. Google said on Sunday it had banned downloads of RT’s mobile app in Ukraine in response to a government legal request.

As Western companies begin to heed new economic new sanctions against Russia and pressure mounts to combat online disinformation, experts say the fight between Russia and the most powerful tech companies may intensify.

Reporting by Elizabeth Culliford in New York and the Moscow bureau; Editing by Kenneth Li and Daniel Wallis