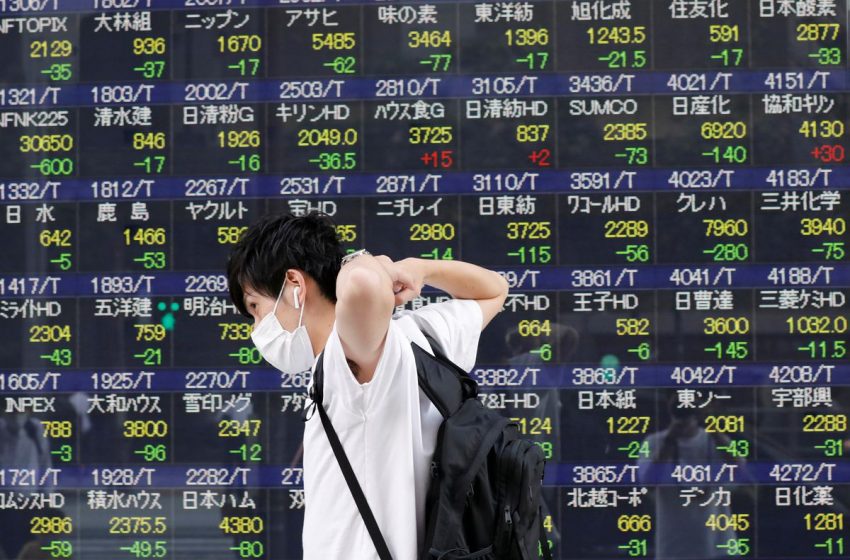 A man wearing a protective mask, amid the COVID-19 outbreak, walks past an electronic board displaying Japan’s Nikkei index outside a brokerage in Tokyo, Japan, September 21, 2021. REUTERS/Kim Kyung-Hoon

SYDNEY, Nov 8 (Reuters) – Asian share markets were mixed on Monday as risk assets found support from the upbeat U.S. October payrolls report, but faced another test later in the week from a reading on U.S. inflation that could spook the rate horses.

Data out over the weekend also showed China’s exports beat forecasts in October to deliver a record trade surplus, although a miss on imports added to evidence of a slowing in domestic demand. read more

Chinese blue chips (.CSI300) dithered either side of flat, stuck in a range that has held for almost four months.

Nasdaq futures were off 0.4%, after 10 straight sessions of gains which left the index looking overextended. S&P 500 futures dipped 0.2%, while EUROSTOXX 50 futures eased 0.1% and FTSE futures were flat.

Tightness in the labour market combined with dislocation in global supply chains should result in another high reading for U.S. consumer prices due on Wednesday, with any upside surprise likely to rekindle talk of an earlier Federal Reserve hike.

Analysts note an alternative measure of core trimmed mean inflation has already picked up markedly to an annual 3.6%.

“Another acceleration in the monthly annualised trimmed CPI will reinforce our view that the Fed is behind the curve,” said Kim Mundy, a senior economist & currency strategist at CBA.

“The longer the FOMC waits to tighten monetary policy, the greater the risk the FOMC tightens more to bring inflation back under control.”

No less than six Fed officials are speaking on Monday, with the most attention likely on Vice Chair Richard Clarida who is talking on Fed and ECB policy.

After some wild swings, Treasuries still managed to end last week with a rally, thanks partly to a huge drop in UK bond yields where short-dated debt enjoyed its best week since 2009 after the Bank of England skipped a chance to hike.

That led the market to push out the likely timing and pace of tightening not just there, but in Europe and the United States too. Fed Funds now have a rate rise fully priced by September 2022, instead of July, a second not until February 2023 instead of December 2022.

The drop took a little steam out of the dollar, which had hit a more than one-year high after the payrolls data. The dollar index was holding at 94.331 , from a top of 94.634.

The retreat in bond yields was a boon for gold, which offers no fixed return, and lifted it to $1,818 an ounce .

Saudi Aramco also raised its official selling price of crude to all buyers across the globe.