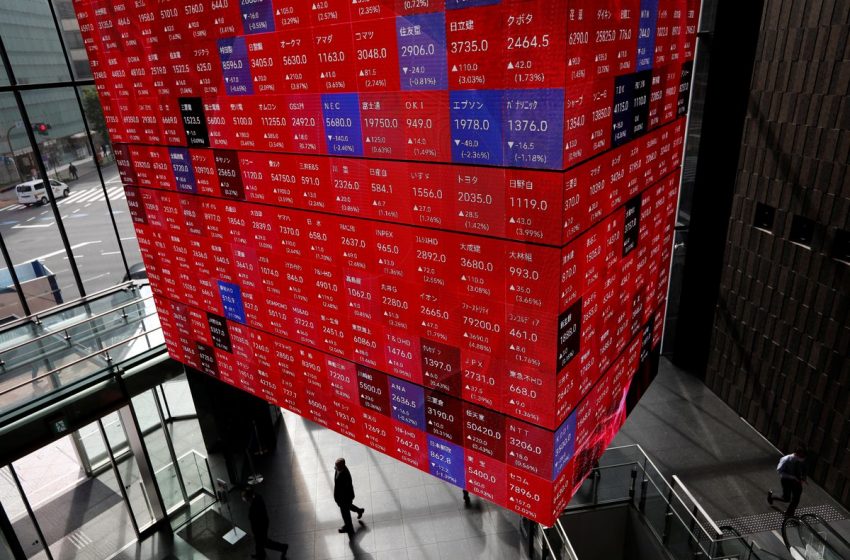 HONG KONG, Nov 25 (Reuters) – Asian shares wobbled lower on Thursday, hurt by the U.S. dollar which continued to march higher as investors bet on interest rates rising more quickly in the United States than in other major economies such as Japan and the euro zone.

MSCI’s broadest index of Asia-Pacific shares outside Japan (.MIAPJ0000PUS) fell 0.18% to a six-week low, having posted a small decline in each of the past six trading sessions. Japan’s Nikkei (.N225) rose 0.8%.

Notably in Hong Kong, shares of Kaisa Group Holdings Ltd’s (1638.HK) rose as much as 24% on their return to trading, after the embattled Chinese developer said it was offering bondholders an option to exchange existing bonds with new bonds having an extended maturity, to improve financial stability. read more

In broad terms, “when it comes to regional equities allocation, we’re watching the U.S. dollar which is making new highs and that is a headwind for emerging market equities,” said Fook-Hien Yap, senior investment strategist at Standard Chartered Bank wealth management.

The dollar is trading near its highest in almost five years versus the Japanese currency at 115.3 yen, and nearly 18 months to the euro which was at $1.1206.

Supporting the greenback, several U.S. Federal Reserve policymakers said they would be open to speeding up the tapering of the central bank’s bond-buying programme if the high rate of inflation held, and move more quickly to raise interest rates, minutes of the Fed’s Nov. 2-3 policy meeting showed. read more

“The market is now pricing in more than two hikes next year, but we think that is overly aggressive. We are only looking for about one hike next year,” said Yap.

These expectations have pushed U.S. treasury yields higher, albeit inconsistently, with benchmark 10 year notes last yielding 1.6427% having risen as high as 1.6930% on Wednesday.

U.S. Treasuries will not trade on Thursday because of the Thanksgiving holiday. U.S. stock markets will also be closed and will have a shortened session on Friday.

Overnight, Wall Street ended higher and is back testing record highs as tech stocks bounced back from a selloff earlier this week.

In other central bank news, the Bank of Korea raised its policy interest rate (KROCRT=ECI) by 25 basis points on Thursday, as widely expected, as concern about rising household debt and inflation offset uncertainty around a resurgence in COVID-19 cases.

Oil prices rose slightly after a turbulent few days in which the United States said it would release millions of barrels of oil from strategic reserves in coordination with China, India, South Korea, Japan and Britain to try to cool oil prices after calls to OPEC+ to pump more went unheeded. However, investors questioned the programme’s effectiveness, leading to price gains.