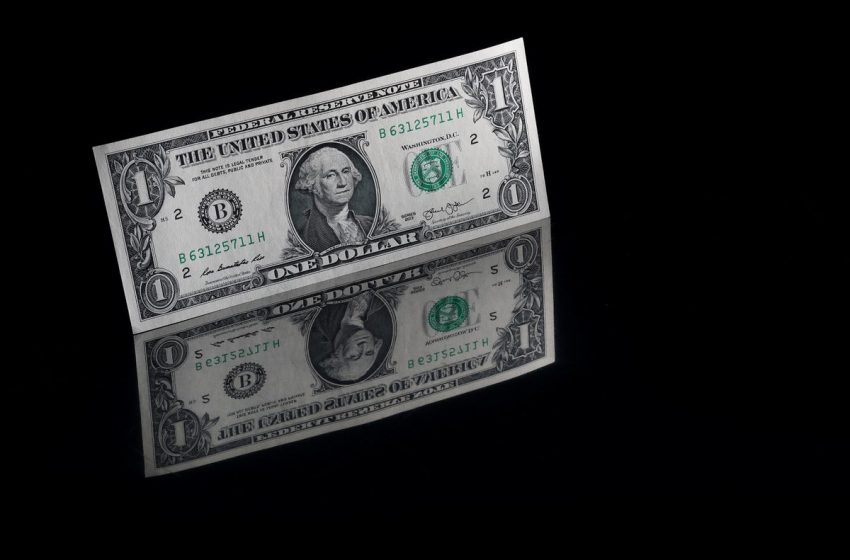 A U.S. one dollar banknote is seen in this illustration taken November 23, 2021. REUTERS/Murad Sezer/Illustration

HONG KONG, Dec 21 (Reuters) – The dollar hovered below recent highs on Tuesday having lost ground overnight after a blow to Democratic spending plans in Washington, but worries about the Omicron coronavirus variant kept risk currencies in check.

The dollar index , which measures the currency against six major peers, was last at 96.513, having lost ground on both the euro and the yen .

The greenback briefly approached 16-month highs at 96.914 last week, after the U.S. Federal Reserve opened the door to as many as three interest rate increases in 2022, and then found support as worries about the Omicron strain caused investors to seek safety.

However, it pulled back on Monday, finishing the session down 0.12% after U.S. Senator Joe Manchin, a moderate Democrat who is key to President Joe Biden’s hopes of passing a $1.75 trillion domestic investment bill – known as Build Back Better – said on Sunday he would not support the package.

“The dollar pulled back on the breakdown of Build Back Better. Less stimulus, weaker growth, and rates dropping at the short-end was enough to push the dollar slightly lower,” said Kyle Rodda, an analyst at IG markets.

The pound was on the back foot at $1.3204 after British Prime Minister Boris Johnson said on Monday he would tighten coronavirus curbs to slow the spread of the Omicron variant if needed.

Omicron infections, which are multiplying rapidly across Europe and the United States, and doubling every two or three days in London and elsewhere, caused a sharp sell-off in share markets on Monday as well as oil.

In a sign of the uncertainty, however, Nasdaq and S&P 500 futures both climbed on Tuesday in early Asia.

Turkey’s lira had volatile day on Monday, even by its usual standards, first falling as much as 10% before ending the session up over 20% after President Tayyip Erdogan introduced a series of steps that he said would ease the burden of the weakened currency on Turks. read more

He also vowed to press on with a low-rates policy that led to the lira’s slide in the first place.

Bitcoin was comparatively quiet, just below $47,000 after trending lower for the past few weeks.