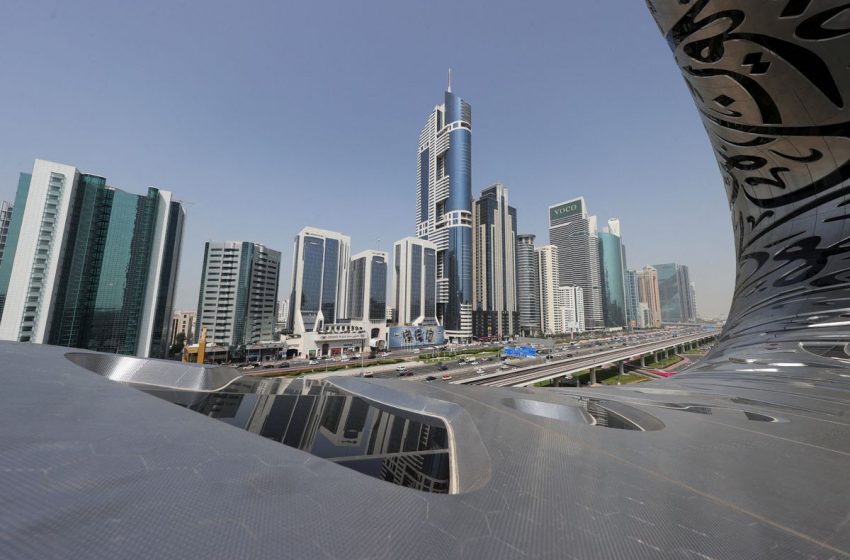 A view of the downtown skyline is seen from the Museum of the Future in Dubai, United Arab Emirates, February 23, 2022. REUTERS/Christopher Pike/File Photo

Dubai’s Mashreqbank (MASB.DU) has stopped lending to Russian banks and is reviewing its existing exposure to the country as a result of heightened risks following Moscow’s invasion of Ukraine, two sources familiar with the matter told Reuters.

The move is one of the first reported instances of a bank in the Middle East halting ties to Russia and underscores growing global nervousness about falling foul of Western sanctions.

Mashreqbank declined to comment on the move, which comes as banks around the world wind down ties with Russian lenders after a spate of new sanctions announced by the United States, Britain, the European Union and Canada, including blocking access to the SWIFT international payment system for some banks.

Russian financial institutions (FIs) were part of the emerging market loan portfolio that Mashreqbank had grown in recent years to expand beyond the Middle East, the sources said.

The exposure was mainly short-term or one-year loans to banks, one of the sources added.

Mashreqbank’s actions indicate that emerging market banks are also getting nervous about their Russian exposure and the potential risk of secondary sanctions, bankers said.

Last year, Mashreqbank agreed to pay $100 million in penalties to resolve a U.S. government probe into violations of sanctions against doing business with Sudan.

Mashreqbank’s decision to stop lending to Russian FIs was not due to any directive from the Central Bank of United Arab Emirates (CBUAE), but was to mitigate the risk from its Russian exposure, the sources said.

A sharp fall in the Russian rouble and the downgrading of Russia by rating agencies were also concerns because it affects the credit quality of Russian banks, they added.

Rating agency S&P lowered Russia’s long-term foreign currency credit rating to ‘BB+’ from ‘BBB-‘, and warned it could lower ratings further, after getting more clarity on the macroeconomic repercussions of the sanctions.

Russia’s central bank has beefed up its banking sector with billions in additional foreign exchange and rouble liquidity, while the government has separately pledged full-scale support to sanctions-hit companies. read more

CBUAE, when asked for comment, directed Reuters to the Targeted Financial Sanctions page on its website and referred questions to the Executive Office of the Committee for Goods and Materials Subject to Import and Export Control, which Reuters could not immediately reach for comment.

Bankers said the UAE central bank has so far not issued any directive on doing business with Russian companies or exposure.

Gulf Arab states including the UAE have taken a neutral stance between Western allies and Russia, with which they are partners under an oil producers’ grouping known as OPEC+.

UAE state funds such as Mubadala have invested in Russian companies and have strategic ties with Russia’s sovereign fund, the Russian Direct Investment Fund (RDIF).

Mubadala declined to comment on whether it is taking any action on Russian exposure. It has invested $3 billion in Russia in about 50 companies, according to its website.