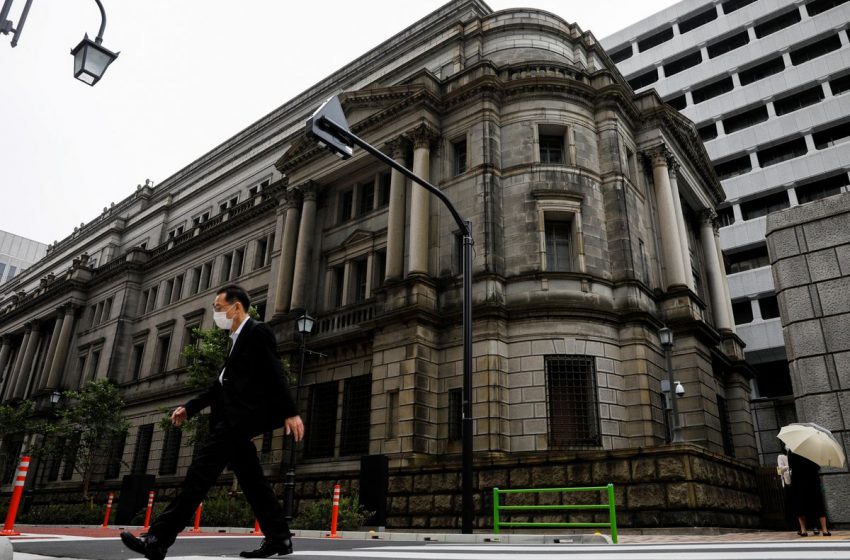 A man wearing a protective mask walks past the headquarters of Bank of Japan amid the coronavirus disease (COVID-19) outbreak in Tokyo, Japan, May 22, 2020.REUTERS/Kim Kyung-Hoon/File Photo

Japan’s selection of a new central bank governor is likely to intensify after an upper house election in July and could determine how quickly the country will follow global counterparts in withdrawing monetary stimulus.

Currently deputy governor, Amamiya has spent most of his career at the central bank drafting monetary policy ideas and is nick-named “Mr. BOJ” for masterminding many of the bank’s unconventional monetary easing ideas.

He played a key role in drafting Kuroda’s huge asset-buying programme in 2013 and consistently called for keeping ultra-low interest rates.

An avid fan of classical music, Amamiya is known for his deep contacts with lawmakers and bureaucrats that help him read which way the political wind is blowing in steering policy.

A career central banker who served as deputy governor until 2018, Nakaso played a key role in navigating an exit from the BOJ’s first spell of quantitative easing in 2006.

With long experience overseeing the BOJ’s market operations and international affairs, Nakaso has repeatedly warned of the drawbacks of prolonged monetary easing such as the distortion its huge presence could create in bond and money markets.

Like Kuroda, Asakawa moved up the ranks at the finance ministry and became Japan’s top financial diplomat in 2015, a job he kept for four years during which he battled a strong yen and engaged in tough negotiations with then U.S. President Donald Trump’s administration.

After retiring from the ministry, he became president of the Asian Development Bank in 2020 – a job Kuroda also took before becoming BOJ governor.

In his book, Asakawa praised Kuroda’s stimulus programme as a right move to beat deflation. He also said yen declines would be harder to stop than yen rises via currency intervention, because the amount of foreign currencies Japan can sell to prop up the yen would be limited to the size of its foreign reserves.

Traditionally, the BOJ and the finance ministry take turns filling the central bank governor post, holding the post for only a single five-year term. That broke when Kuroda was appointed in 2018 to serve a second five-year term.

If history is any guide, the next BOJ governor would be chosen from central bank ranks. But there is a chance Kishida opts for a dark horse candidate.

Among names floated by analysts are Columbia University professor Takatoshi Ito, who is close to Kuroda, and former top currency diplomat Takeo Nakao.

Given Kishida’s close ties with the finance ministry, he may hand-pick a former top bureaucrat from the institution, though there is no consensus on who could be among strong candidates.

A career central banker who spent most of his career at the elite monetary affairs department, Uchida is a rising star who landed a rare reappointment for a second, four-year term as the BOJ’s executive director overseeing monetary policy.

Many analysts see the reappointment as a sign he could fill one of the two deputy governor posts.

Together with Amamiya, Uchida played a key role in drafting many of Kuroda’s policies including the introduction of negative interest rates and yield curve control in 2016.

People who know him say Uchida is a firm believer that the BOJ must maintain ultra-loose monetary for the time being to reflate growth and tighten the job market enough so that wages rise more.

Currently the BOJ’s executive director overseeing international affairs, Shimizu is among the few female central bankers who rose up the ranks in the male-dominated institution.

While her career at the BOJ centred on international and market affairs rather than monetary policy, Shimizu is considered a dark horse candidate as deputy governor or even governor if Kishida wants more diversity in the BOJ leadership.

No female has yet served as BOJ deputy governor or governor.Reporting by Leika Kihara; Editing by Sam Holmes