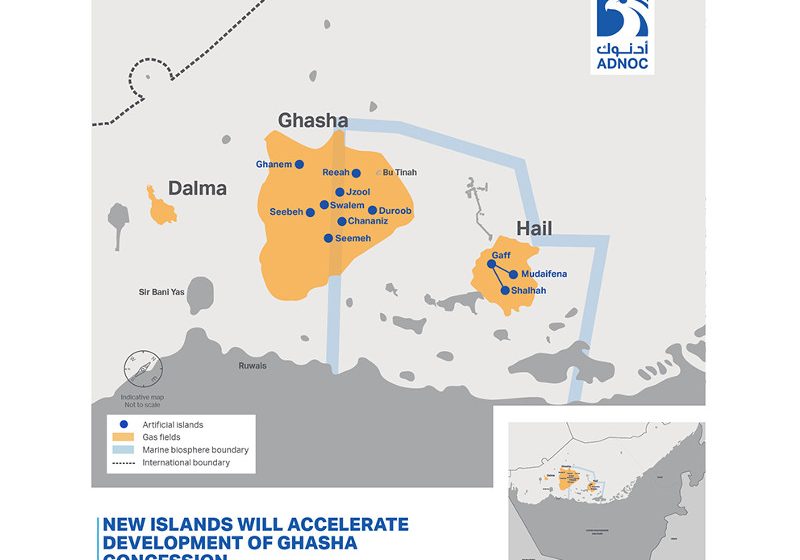 Abu Dhabi National Oil Company (ADNOC) said that the revised Front-End Engineering and Design (FEED) study is currently underway for the Hail & Ghasha Sour Gas Field Development project in Abu Dhabi. The revised study is being undertaken by Technip Energies, a world-leading engineering, and technology firm, and is expected to be completed before the end of 2022.

The final investment decision for the revised Hail & Ghasha project is expected to take later this year, while the first engineering, procurement, and construction phase is scheduled to commence in early 2023.

The Hail & Ghasha is the world’s largest offshore sour gas development and is estimated to hold significant recoverable gas reserves.

When it comes on stream, this mega-project is expected to produce over 1.5 billion standard cubic feet (bscfd) of natural gas per day as well as condensate and oil. In addition, the CO2 capture, dehydration, and export will be an integral part of the project facilities.

Electricity for Over Two Million Homes

The start of production from the concession is expected in 2025, ramping up to full production by the end of the decade. The overall objective of the updated FEED will be to further optimize the project costs for this development as well as to accelerate the integration of carbon capture.

With this production, the project will deliver electricity to more than two million homes in the UAE by the middle of the decade. The company also expects more than 120,000 b/d of oil and condensates to be produced when the project was fully on stream.

The project aims to extract gas and condensate from the fields to provide the additional capacity needed to support the increasing demand for power within the UAE. This project will support the UAE with gas self-sufficiency and increase economic growth.

The project holds multiple trillions of cubic feet of recoverable gas and from which the project is expected to produce more than one billion cubic feet of gas per day (CFD).