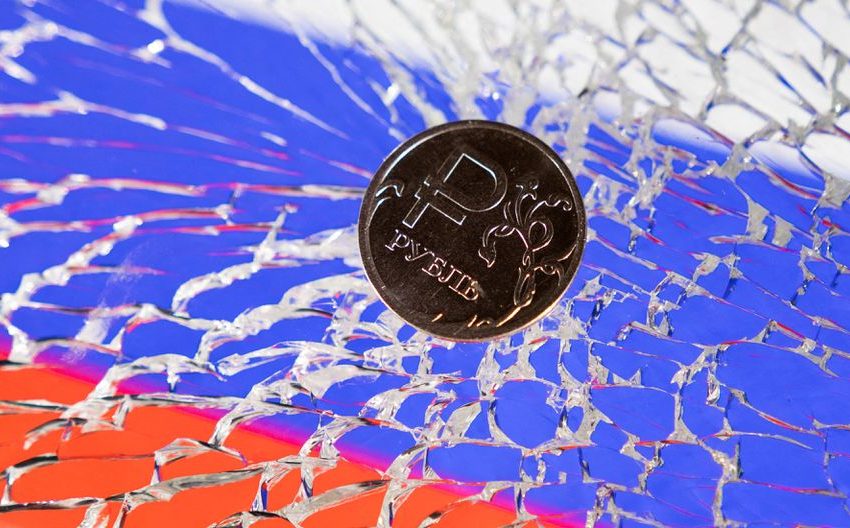 Russian Rouble coin is seen on a broken glass and displayed on the Russian flag in this illustration taken, February 24, 2022. REUTERS/Dado Ruvic/Illustration/File Photo

LONDON, March 25 (Reuters) – Russia’s invasion of Ukraine on Feb. 24 sparked sweeping sanctions that ripped the country out of the global financial fabric and sent its economy reeling.

A month on, Russia’s currency has lost a large part of its value and its bonds and stocks have been ejected from indexes. Its people are experiencing economic pain that is likely to last for years to come.

Below are five charts showing how the past month has changed Russia’s economy and its global standing:

In 2020, Russia was the world’s 11th-largest economy, according to the World Bank. But by the end of this year, it may rank no higher than No. 15, based on the end-February rouble exchange rate, according to Jim O’Neill, the former Goldman Sachs economist who coined the BRIC acronym to describe the four big emerging economies Brazil, Russia, India and China.

Recession looks inevitable. Economists polled by the central bank predicted an 8% contraction this year and for inflation to reach 20%. read more

“Altogether, our projections mean that current developments are set to wipe out the economic gains of roughly fifteen years,” the IIF said in a note.

Since taking office in 2013, central bank governor Elvira Nabiullina’s biggest triumph was curbing inflation from 17% in 2015 to just above 2% in early-2018. As price pressures rose in the post-pandemic months, she defied industrialists by raising interest rates eight months straight.

Nabiullina also resisted calls in 2014-2015 for capital controls to stem outflows following the annexation of Crimea.

But those achievements have been torn to shreds in less than a month.

Annual price growth has accelerated to 14.5% and should surpass 20%, five times the target. Households’ inflation expectations for the year ahead are above 18%, an 11-year high.

While panic-buying accounts for some of this, rouble weakness may keep price pressures elevated read more .

With Russia’s reserves warchest frozen overseas, Nabiullina was forced to more than double interest rates on Feb. 28 and introduce capital controls. The central bank now expects inflation back at target only in 2024.

Sanctions are forcing index providers to eject Russia from benchmarks used by investors to funnel billions of dollars into emerging markets.

JPMorgan (.JPMEGDR) and MSCI are among those that have announced they are removing Russia from their bond and stock indexes respectively (.MSCIEF).

Russia’s standing in these indexes had already taken a hit following the first set of Western sanctions in 2014 and then in 2018, following the poisoning of a former Russian spy in Britain and investigations into alleged Russian meddling in the 2016 U.S. elections.

On March 31, Russia’s weighting will be dialled to zero by nearly all major index providers.

When Russian troops stormed into Ukraine, their country had a coveted “investment grade” credit rating with the three major agencies S&P Global, Moody’s and Fitch.

That allowed it to borrow relatively cheaply and a sovereign debt default appeared a distant prospect.

In the past four weeks, Russia has suffered the largest cuts ever made to a sovereign credit score. It is now at the bottom of the ratings ladder, flagging an imminent risk of default.

A month ago, the rouble’s one-year average exchange rate sat at 74 per dollar. Trading on different platforms showed the ample liquidity and tight bid/ask spreads expected for a major emerging market currency.

All that has changed. With the central bank bereft of a large portion of it hard currency reserves, the rouble plunged to record lows of more than 120 per dollar locally. In offshore trade it fell as low as 160 to the greenback.

As liquidity dried up and bid/ask spreads widened, pricing the rouble has become haphazard. The exchange rate is yet to find a balance on- and offshore.