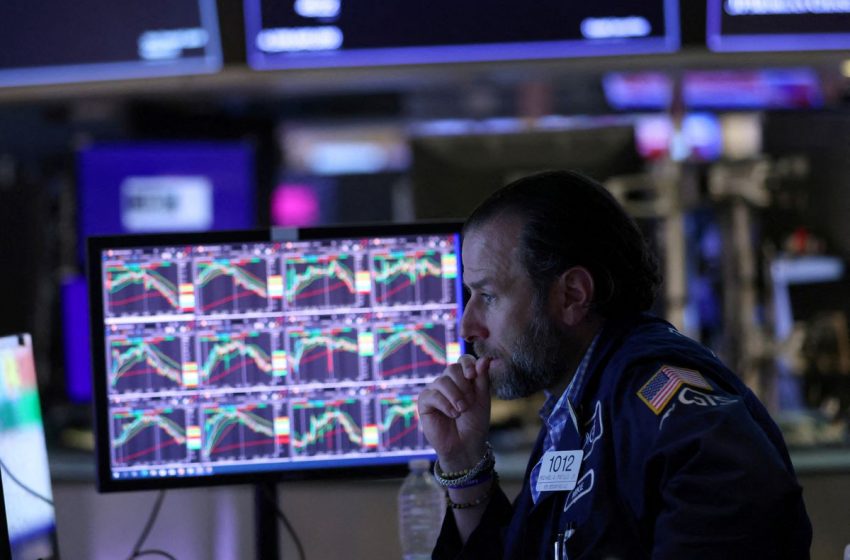 A trader works on the trading floor at the New York Stock Exchange (NYSE) in Manhattan, New York City, U.S., May 18, 2022. REUTERS/Andrew Kelly

U.S. stock index futures rose on Thursday as a pullback in oil prices lifted investor sentiment in the run-up to a private payrolls report that could provide a clearer picture of the labor market.

Prices of global benchmark Brent crude were down more than 2% ahead of a meeting of key producers later in the day, with speculation swirling that Saudi Arabia may boost production. Brent crude had crossed $120 a barrel earlier this week on the prospect of a European Union ban on Russia supplies.

“Any signs that OPEC is finally willing to put a ceiling on oil prices would mean less threat of inflation running wild, less need for aggressive central bank tightening, and less recession risks – which would be music to the ears of riskier assets like stocks,” said Marios Hadjikyriacos, senior investment analyst at brokerage XM.

The ADP National Employment report, due at 8:15 a.m. ET, is expected to show U.S. private payrolls rose by 300,000 jobs last month, after rising by 247,000 in April, despite a tight labor market and tightening financial conditions.

It will be followed by weekly jobless claims data at 8:30 a.m. ET and factory order data after the market open.

The Federal Reserve’s Beige Book report on Wednesday showed the jobs market still appeared very tight with a majority of districts reporting strong wage growth, although in a few regions, firms said wage rate increases were leveling off or edging down. read more

Wall Street’s three major indexes had closed lower in the previous session as investors bet that the latest economic data would do nothing to push the Fed off track from its aggressive hiking cycle.

Fears around the impact of interest rate hikes, the war in Ukraine, supply chain snarls and higher Treasury yields have pressured stock markets recently, with the benchmark S&P 500 index (.SPX) and the tech-heavy Nasdaq (.IXIC) both on course for a weekly decline of more than 1%.

Reporting by Anisha Sircar and Devik Jain in Bengaluru; Editing by Aditya Soni