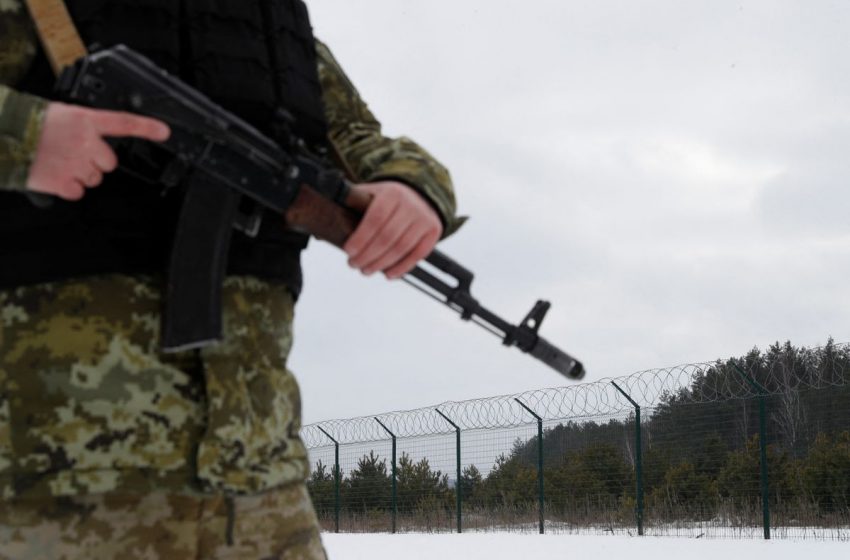 A member of the Ukrainian State Border Guard Service patrols the area near the frontier with Russia in the Chernihiv region, Ukraine February 16, 2022. REUTERS/Valentyn Ogirenko

A potential invasion of Ukraine by neighbouring Russia would be felt across a number of markets, from wheat and energy prices and the region’s sovereign dollar bonds to safe-haven assets and stock markets.

Below are five charts showing where a potential escalation of tensions could be felt across global markets:

A major risk event usually sees investors rushing back to bonds, generally seen as the safest assets, and this time may not be different, even if a Russian invasion of Ukraine risks further fanning oil prices — and therefore inflation.

Inflation at multi-decade highs and impending interest rate rises have made for a tetchy start to the year for bond markets, with U.S. 10-year rates still hovering close to the key 2% level and German 10-year yields above 0% for the first time since 2019.

But an outright Russia-Ukraine conflict could change that.

In forex markets, the euro/Swiss franc exchange rate is seen as the biggest indicator of geopolitical risk in the euro zone as the Swiss currency has long been viewed by investors a safe haven. It hit its strongest levels since May 2015 in late January.

Gold, also seen as a shelter in times of conflict or economic strife, is clinging to 13 month peaks.

Any interruption to the flow of grain out of the Black Sea region is likely to have a major impact on prices and further fuel food inflation at a time when affordability is a major concern across the globe following the economic damage caused by the COVID-19 pandemic.

Four major exporters – Ukraine, Russia, Kazakhstan and Romania – ship grain from ports in the Black Sea which could face disruptions from any military action or sanctions.

Energy markets are likely to be hit if tensions turn into conflict. Europe relies on Russia for around 35% of its natural gas, mostly coming through pipelines which cross Belarus and Poland to Germany, Nord Stream 1 which goes directly to Germany, and others through Ukraine.

In 2020 volumes of gas from Russia to Europe fell after lockdowns suppressed demand and did not recover fully last year when consumption surged, helping to send prices to record highs.

As part of possible sanctions should Russia invade Ukraine, Germany has said it could halt the new Nord Stream 2 gas pipeline from Russia. The pipeline is projected to increase gas imports to Europe but also underlines its energy dependence on Moscow.

Analysts expect natural gas exports from Russia to Western Europe to be significantly reduced through both Ukraine and Belarus in the event of sanctions, saying gas prices could revisit Q4 levels.

JPMorgan said the tensions risked a “material spike” in oil prices and noted that a rise to $150 a barrel would reduce global GDP growth to just 0.9% annualised in the first half of the year, while more than doubling inflation to 7.2%.

Listed western firms could also feel the consequences from a Russian invasion, though for energy firms any blow to revenues or profits might be somewhat offset by a potential oil price jump.

Britain’s BP owns a 19.75% stake in Rosneft, which makes up a third of its production, and also has a number of joint ventures with Russia’s largest oil producer.

Shell holds a 27.5% stake in Russia’s first LNG plant, Sakhalin 2, accounting for a third of the country’s total LNG exports, as well as a number of joint ventures with state energy giant Gazprom .

In the financial sector, the risk is concentrated in Europe.

Austria’s Raiffeisen Bank International (RBIV.VI) derived 39% of its estimated net profit last year from its Russian subsidiary, Hungary’s OTP and UniCredit (CRDI.MI) around 7% from theirs, while Societe Generale (SOGN.PA) was seen generating 6% of group net profits through its Rosbank retail operations. Dutch financial company ING (INGA.AS) also has a footprint in Russia though that accounts for less than 1% of net profit, according to calculations by JPMorgan.

Looking at loan exposure to Russia, French and Austrian banks have the largest among Western lenders at $24.2 billion and $17.2 billion, respectively. They are followed by U.S. lenders at $16 billion, Japanese at $9.6 billion and German banks at $8.8 billion, data from the Bank for International Settlements (BIS) shows.

Other sectors also have exposure: Renault (RENA.PA) generates 8% of its EBIT in Russia. Germany’s Metro AG’s (B4B.DE) 93 Russian stores generate just under 10% of its sales and 17% of its core profit while Danish brewer Carlsberg (CARLb.CO) owns Baltika, Russia’s largest brewer with market share of almost 40%.

Russian and Ukrainian assets will be at the forefront of any markets fallout from potential military action.

Both countries’ dollar bonds have underperformed their peers in recent months as investors have trimmed exposure amid escalating tensions between Washington and its allies and Moscow.

Ukraine’s fixed income markets are chiefly the remit of emerging market investors, while Russia’s overall standing on capital markets has shrunk in recent years amid sanctions and geopolitical tensions, somewhat cushioning any threat of contagion through those channels.

However, Ukrainian and Russian currencies have also suffered, with the hryvnia the worst-performing emerging markets currency year-to-date and the rouble at number five.

“The events of late 2014 remind us of the liquidity gaps and U.S. dollar hoarding that led to a substantial drop in the rouble at that time,” said Turner.