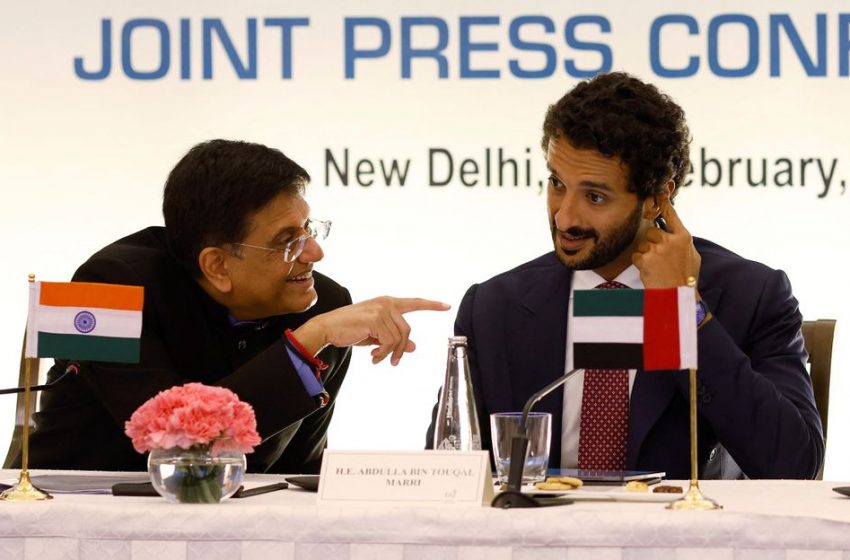 India and the United Arab Emirates signed a broad trade and investment pact on Friday that will eventually cut all tariffs on each other’s goods and aims to increase annual trade between the two nations to $100 billion within five years.

The virtual signing ceremony marks the first trade deal sealed by the Gulf state since it began pursuing such pacts last September in a bid to strengthen its status as a business hub.

Piyush Goyal, India’s commerce minister, told reporters the deal could create more than a million jobs for India in the next few years, particularly in labour intensive sectors such as the auto industry, plastics, leather and engineering.

“The agreement … not only deepens our economic and trading relationship with a close partner but unlocks a new phase of global cooperation for us,” Sheikh Mohamed said in a joint statement.

The Comprehensive Economic Partnership Agreement (CEPA), as it is known, is expected to boost annual bilateral non-oil trade from $60 billion to $100 billion within the next three to five years, India’s Prime Minister’s office said.

“There will be a huge flow of trade and investments between both nations and it’s going to open the door for more business opportunities,” Emirati Minister State for Foreign Trade Thani Al Zeyoudi told Reuters.

The CEPA is expected to be implemented by May after the UAE cabinet approval, Goyal said.

The agreement, which was not immediately made public, eliminates 80% of tariffs on UAE and India goods, while all tariffs are to be removed within ten years, Al Zeyoudi said.

UAE commodities like aluminum, copper and petrochemicals would benefit from the removal of tariffs, he said.

The deal also covers services, investments, intellectual property, and a commitment by the UAE to create 140,000 highly skilled jobs by 2030.

India is the second largest trading partner of the UAE, where each year billions of dollars in remittances are sent home by more than three million Indians working in the Gulf state.

The UAE is pursuing similar trade and investment deals with nations including Turkey and South Korea, and expects to soon finalise bilateral negotiations with Israel and Indonesia.

It has also announced a raft of regulatory and social reforms in recent years to make business and life easier in the country where most of the 10 million population are foreigners.

“We’re moving from a regional to a global hub,” Al Zeyoudi said, referring to the trade deals and policy announcements. Reporting by Manoj Kumar and Aftab Ahmed in New Delhi, Alexander Cornwell in Dubai; Editing by Mark Potter and Christina Fincher