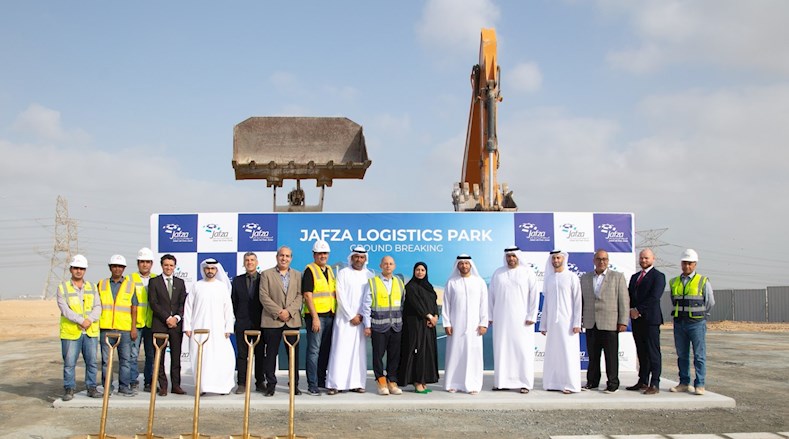 Work on the first phase of Jafza Logistics Park in Jebel Ali Free Zone (JAFZA), the DP World’s trade and logistics hub, began with ground-breaking ceremony and will be completed in 2023.

The planned development will house the growing number of warehousing, processing and logistics activities carried out in Dubai.

Jafza Logistics Park will reinforce the success of the logistics cluster in Jafza, which has already grown by 14% since 2016. The project covers a total leasable area of over 46,000 sq m, of which 87% will be allocated to warehousing. The remaining space is dedicated to office facilities, DP World said.

“As the UAE continues to grow into a global processing and re-distribution gateway, we have experienced a significant spike in demand for logistics and warehousing space,” Abdullah bin Damithan, CEO and MD, DP World UAE and Jafza, said.

He further added: “We are building the Jafza Logistics Park in response to this increase in demand and to further boost the development of the UAE’s logistics sector.”

Logistics companies in e-commerce and other growing sectors will benefit from the Park’s digital trade enablement, competitive costs, and customisable units. “We are in discussions with a number of large customers that need 60-80% of the space and may need to commission phase two ahead of schedule,” Bin Damithan said.

Jafza already plays host to over 460 companies from 30 countries, almost all international logistics providers which already operate from the free zone.

Located between Jebel Ali Port, Al Maktoum International Airport, and Etihad Rail’s Jebel Ali station, which has yet to come into operation, the park is expected to boost Dubai’s credentials as a trading and logistics hub and pave the way for further advancements in Dubai’s ability to handle sea-air cargoes.

Meanwhile, DP World, while stressing the wisdom of its strategy to move from a pure terminal operator to an end-to-end logistics player, said in an investor presentation in April that although containerised revenue declined from around 80% of the total in 2014 to only 45% in 2021, overall company revenues had increased from $3.4 billion to $10.8 billion over the same period.

Jebel Ali (UAE) handled 3.4 million teu in the first quarter of 2022, a decrease of 1.0% year-on-year. At a consolidated level, DP World’s terminals handled 11.3m teu during the first quarter of 2022, increasing 1.4% on a reported basis and up 1.1% year-on-year on a like-for-like basis. The group highlight was the Americas and Australia regions, which combined saw an increase in throughput of 4.3% to 2.7m teu.

“As anticipated, the volume growth in first quarter of 2022 has softened due to the strong prior year performance and uncertain macro environment,” said group chairman and CEO Sultan Ahmed Bin Sulayem.

“However, we continue to see robust growth in markets such as Asia Pacific and the Americas, while in Europe, London Gateway’s strong performance has continued into 2022. The softer volumes Jebel Ali (UAE) is due to loss of low margin throughput where we remain focused on more profitable origin & destination cargo,” he added.