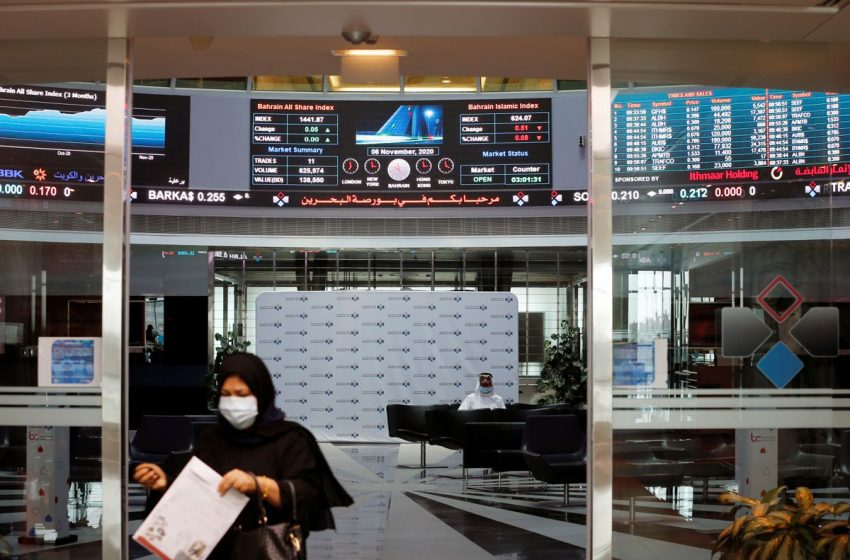 A trader walks out of Bahrain Bourse after Joe Biden won the U.S. presidency, in Manama, Bahrain, November 8, 2020. REUTERS/Hamad I Mohammed/File Photo

Nov 25 (Reuters) – Major stock markets in the Gulf rose in early trade on Thursday, with the Saudi index on track to extend gains for a second session.

The index on Tuesday ended three sessions of declines triggered by tensions with Yemen’s Iran-aligned Houthis, who claimed responsibility on Nov. 20 for drone attacks in several parts of the kingdom, including at Saudi Aramco facilities in Jeddah. read more

On Wednesday the Saudi-led coalition said it was launching air strikes on military targets in Yemen’s capital Sanaa and asked civilians not to approach the targeted areas. read more

Dubai’s main share index (.DFMGI) gained 0.9%, boosted by a 9% surge in Amlak Finance (AMLK.DU), and was on course to rise for a tenth session in eleven.

Last week the Islamic finance company swung to a third-quarter net profit of 887.1 million dirhams ($241.55 million), against a loss of 151.4 million dirhams a year earlier.

Turkey and the United Arab Emirates signed accords for billions of dollars of investments on Wednesday, including in technology and energy, after talks between President Tayyip Erdogan and Abu Dhabi Crown Prince Sheikh Mohammed bin Zayed al-Nahyan. read more

Sheikh Mohammed’s visit to Ankara, the first in years, comes as the two countries work to mend frayed ties and amid a currency crisis in Turkey.