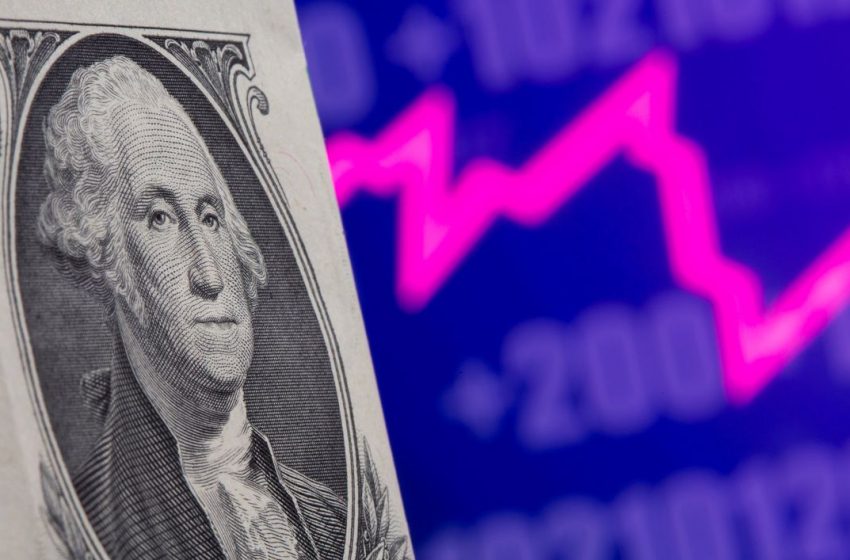 A U.S. one dollar banknote is seen in front of displayed stock graph in this illustration taken May 7, 2021. REUTERS/Dado Ruvic/Illustration

Whether or not you believe in the signalling power of the U.S. Treasury curve, inversion of the key 2-10 year segment remains a sit up and pay attention moment for world markets.

That’s what happened, albeit briefly, on Tuesday when two-year bond yields rose above 10-year ones, inverting the curve for the first time since 2019 in what is widely regarded as an indicator of rising recession risks. That spread is just under four bps in London, flirting with inversion territory.

And while Fed researchers believe the predictive power of the spread to signal a recession is “probably spurious,” suggesting other yield curve measures are better, the spread’s track record as a recession indicator is punchy.

Since the 1960s, an inverted Treasury curve has been followed by a recession within two years, including the 2020 downturn caused by COVID-19. That means the significance of the latest inversion won’t be lost on markets — or the Fed.

And in another wow moment for the bond markets, the two-year German bond yield popped briefly into positive territory for the first time in eight years. Only three weeks ago, that yield troughed at around minus 80 bps.

With Germany warning that it could be heading for a gas supply emergency even as inflation surges, bond yields may be headed higher. read more

Russia-Ukraine talks meanwhile will remain in focus, with positive headlines likely to be a trigger for a fresh risk-on move.

Asia shares joined a global rally as hopes rose for a negotiated end to the Ukraine conflict. European stock futures are mixed and U.S. futures are a touch softer.

Equity markets appear to be in a rally on anything kind of mood but uncertainty remains high and that resilience will likely be put to the test soon.

German inflation data out later in the day is also one to watch.