Morning Bid: Buy the dip? Or pray for Fed put? 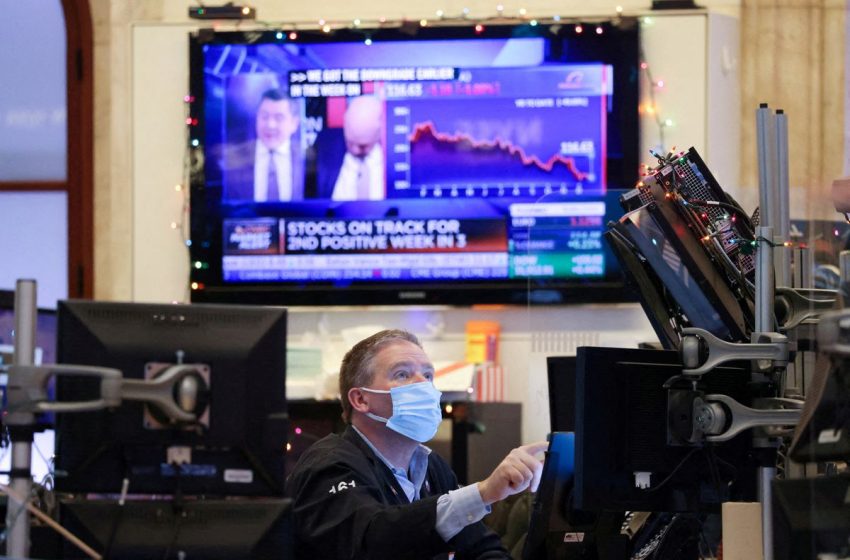 Bears are on the prowl in markets while a different sort menaces Europe’s eastern flank.

It’s probably futile to expect the Russian bear to retreat the way Wall Street bears did late on Monday, when sentiment turned on a dime, allowing the S&P 500 which was 4% in the red at one point, to close higher.

Clearly dip-buyers haven’t entirely fled equity markets. Or was it a function of all those short Nasdaq positions, which suddenly found themselves in the money?

The impulse hasn’t carried through, with Asia deep in the red and Wall Street futures down almost 2%. Option market readings are not reassuring either; trading in put options, used to place bearish bets, outnumbered bullish call options by 1.1-to-1 on Monday, apparently the most bearish that ratio has been since March 2020.

Away from markets though, the global economic picture isn’t looking too bad. PMIs advance readings on Monday did show an Omicron-driven slowdown in December business activity but signalled a peaking in supply chain delays. South Korean GDP expanded at the fastest pace in 11 years and of the U.S. companies that have reported Q4 earnings, 77% beat forecasts.

In the middle of this market churn, the Fed starts a two-day meeting which may well be the last before a March interest rate liftoff. Many hope it will pay attention to the tightening in financial conditions such large equity selloffs inevitably cause. JPMorgan cite the robust earnings season to argue the bearishness is overdone. And after all, they add “the worst-case scenario could see the return of the Fed put”.