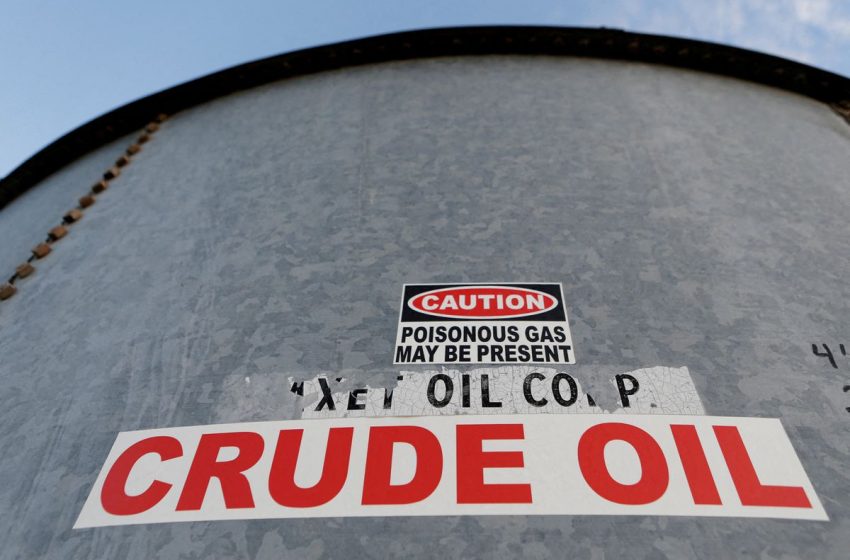 Sticker reads crude oil on the side of a storage tank in the Permian Basin in Mentone, Loving County, Texas, U.S. November 22, 2019. REUTERS/Angus Mordant/

Oil prices rallied for a third day on Tuesday as major producers Saudi Arabia and the United Arab Emirates looked unlikely to be able to boost output significantly while Western governments agreed to explore ways to cap the price of Russian oil.

Leaders of the G7 group of wealthy nations said they will explore a potential ban on transporting Russian oil that has been sold above a certain price as they seek to step up pressure on Moscow over its invasion of Ukraine. read more

Russian oil export revenue climbed in May even as volumes fell, the International Energy Agency said in its June report.

Western bans on Russia and its oil and gas output have led to a sharp rise in global energy prices in recent months. But other major producers have yet to implement a significant boost to production.

Saudi Arabia and the UAE have been seen as the only two countries in the Organization of the Petroleum Exporting Countries (OPEC) with spare capacity to make up for lost Russian supply and weak output from other member nations.

“A seam of tight supply news bolstered the market. Two major producers, Saudi Arabia and the UAE, are said to be at, or very close to, near‑term capacity limits,” Commonwealth Bank commodities analyst Tobin Gorey said in a note.

French President Emmanuel Macron told U.S. President Joe Biden on the sidelines of the G7 meeting that the UAE was producing at maximum capacity and Saudi Arabia could increase output by only 150,000 bpd, well below its nameplate spare capacity of about 2 million bpd. read more

UAE Energy Minister Suhail al-Mazrouei on Monday said that the UAE was producing near maximum capacity based on its quota of 3.168 million barrels per day (bpd) under the agreement with OPEC and its allies, a group known as OPEC+. read more

Libya’s National Oil Corp on Monday said that it might have to declare force majeure in the Gulf of Sirte area within the next three days unless production and shipping resume at oil terminals there.

Those factors underscore market shortages that have led to a rebound this week, countering recession jitters that weighed on prices over the previous two weeks.