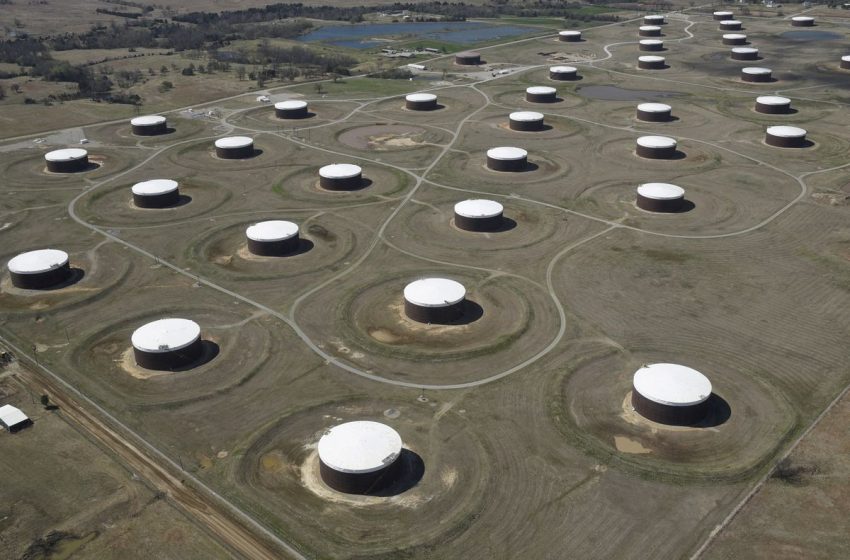 Crude oil storage tanks are seen from above at the Cushing oil hub, in Cushing, Oklahoma, March 24, 2016. REUTERS/Nick Oxford//File Photo

Oil prices reached seven-year highs on Friday as geopolitical tensions and a winter storm in the United States fuelled concerns over supply disruptions.

Both benchmarks were on course for a seventh consecutive weekly gain.

“The latest upswing was triggered by a cold snap in Texas, which is fuelling concerns about production outages in the Permian Basin, the largest U.S. shale play,” said Commerzbank commodities analyst Carsten Fritsch.

A massive winter storm swept across central and northeast regions of the United States on Thursday, knocking out power to thousands. read more

Tight oil supplies pushed the six-month market structure for WTI into steep backwardation of $8.40 a barrel on Friday, the widest since November 2021.

Backwardation exists when contracts for near-term delivery are priced higher than those for later months, encouraging traders to release oil from storage to sell it promptly.

Oil markets have also gained support from tensions surrounding the Ukraine crisis, which have heightened concerns over oil supplies that are already tight.

The Organization of the Petroleum Exporting Countries (OPEC) and allies led by Russia, together known as OPEC+, agreed this week to stick to moderate output increases of 400,000 barrels per day (bpd), with the group already struggling to meet existing targets and despite pressure from top consumers to raise production more quickly. read more

Commerzbank has raised its oil price forecast for the first quarter of 2022 to $90 a barrel, up from $80 previously.

Over the medium term, however, Citi Research expects the oil market to flip into surplus as soon as the next quarter, helping to put the brakes on the recent surge in prices. Reporting by Rowena Edwards Additional reporting by Roslan Khasawneh in Singapore Editing by David Goodman and Louise Heavens