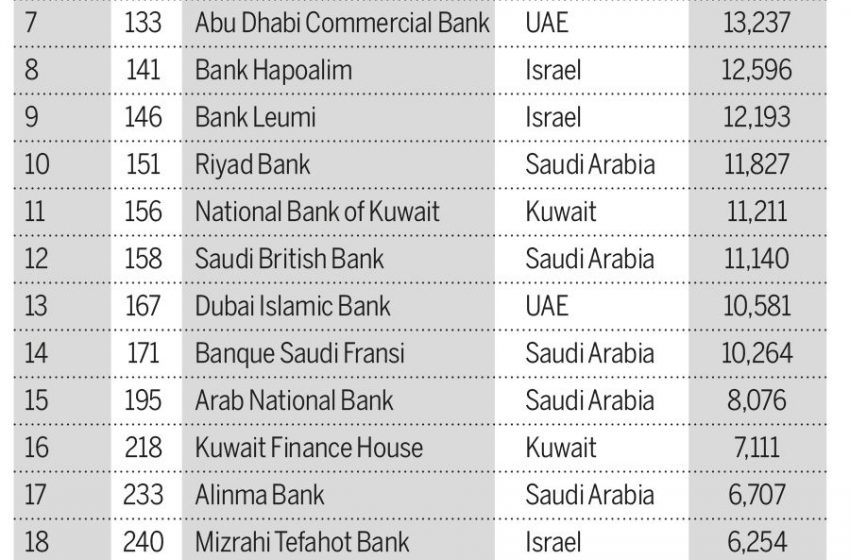 Doha-based Qatar National Bank (QNB) has topped the list in the Middle East rankings for third successive year in The Banker’s Top 1000 World Banks ranking for 2021.

However, QNB is unlikely to hold the position as Saudi Arabia’s National Commercial Bank (NCB) — which rose to second place from fourth last year — looks set to take the crown in 2022 following its merger with local rival Samba Financial Group, according to a report published by The Banker.

In a challenging year for regional lenders that saw impairments rise across the board, QNB did just enough to retain the top spot in the Middle East, even as its growth slowed considerably in the midst of the coronavirus crisis. QNB — whose profits dropped by more than 16% — saw its Tier 1 capital rise by 3.3% in 2020 compared with 10.4% the previous year. The comparatively small increase meant it dropped from 72nd to 79th in this year’s overall Top 1000 ranking.

NCB, by contrast, experienced a watershed year, with profitability and asset quality coming in ahead of analyst expectations. Customer deposits rose by17.8% while its loan book grew by 23%, benefiting from the country’s booming retail mortgage market.

The bank, which overtook the UAE’s First Abu Dhabi Bank (FAB) and Emirates NBD to gain second place in the regional rankings, experienced a 16.7% rise in its Tier 1 capital base. This is better than any other lender in the regional top 10, and helped it climb from 94th place to 89th in the overall ranking.

It is the merger with Samba — which climbs from 7th to 6th place in the regional rankings — that should see NCB, in its combined form, overtake QNB as the region’s largest lender. The deal, announced in June 2020 and completed this April, creates an entity (subsequently rebranded as Saudi National Bank) with a Tier 1 capital base of around $35 billion, which is likely to rank in the top 60 in next year’s Top 1000.

Saudi Arabian lenders are the main regional gainers in this year’s Top 1000, as loan books continued to rise healthily on the back of a state-sponsored drive for home ownership.

The country’s second largest lender Al Rajhi — which recorded the best return on capital of any Arab bank — rose from 115th place to 113rd in the Top 1000 rankings, with Banque Saudi Fransi rising from 175th place to 171th place on the back of a 17.6% rise in Tier 1 capital. Dubai Islamic Bank was the only other Arab gainer in the 2021 Top 1000, rising from 187th place to number 167, thanks to its acquisition of local rival Noor Bank.

The only other regional lenders to improve their showing in the overall Top 1000 are Bank Leumi and Mizrahi Tehafot Bank of Israel. Mizrahi Tehafot Bank, which recorded a Tier 1 capital base rise of 33.2% rose 33 positions to 240th place in this year’s Top 1000.