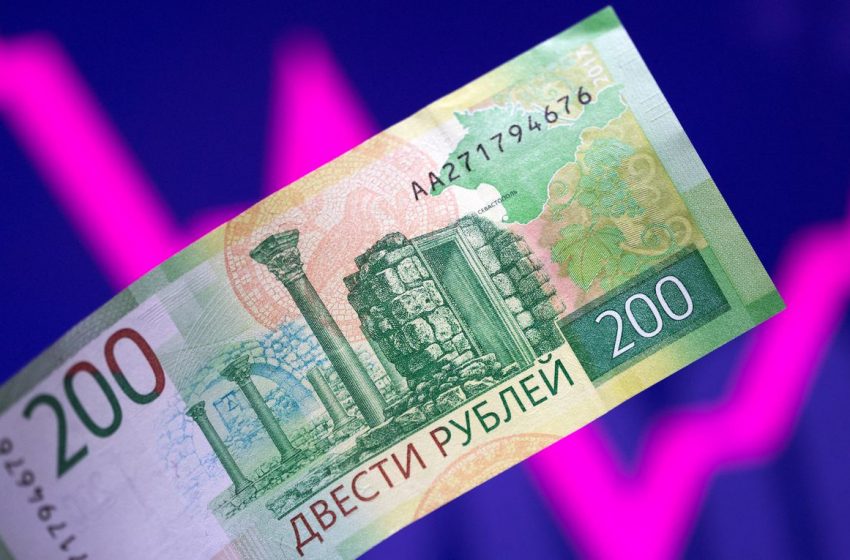 A Russian rouble banknote is seen in front of a descending and rising stock graph in this illustration taken March 1, 2022. REUTERS/Dado Ruvic/Illustration

Foreign investors are effectively stuck with their holdings of Russian stocks and rouble-denominated bonds after the central bank put a temporary halt on payments and major overseas’ settlement systems stopped accepting Russian assets.

Moscow is blocking foreign investors, who hold tens of billions of dollars worth of Russian stocks and bonds, from exiting after its invasion of Ukraine triggered a wave of economic sanctions and a haemorrhage of assets. read more

The Bank of Russia said on Wednesday it had banned coupon payments for foreign investors holding rouble-denominated sovereign debt, known as OFZs, and Russian companies were also barred from paying dividends to overseas shareholders. It did not specify how long the curbs, which don’t apply to local investors, would last.

“Issuers are eligible to take decisions on paying dividends and making payments on other securities,” the central bank said in a statement. “But actual payments … towards foreign clients will not be made. This applies to OFZs as well.”

The National Settlement Depositary (NSD), the Russian system for overseeing the sale of securities, said separately it was limiting payment options on Russian securities for foreign individuals and companies, as well as a right to transfer such assets, in line with a central bank request.

The world’s biggest settlement systems, Euroclear and Clearstream, are no longer accepting Russian assets, effectively shutting off an exit route for overseas investors.

Settlement systems are a key part of the global financial system, holding trillions of dollars of assets for banks and investors and settling deals on their behalf.

Belgium-based Euroclear said in a note on Tuesday that the NSD had blocked its accounts as a result of the central bank measures.

“To the extent legally permissible, you should wire out any remaining long balances in roubles as soon as possible,” it said. read more

Euroclear said it would immediately disable its account at its Russian correspondent bank, Dutch group ING.

Clearstream also informed its customers on Tuesday evening that the NSD has blocked all securities held on Clearstream Banking’s FNH Account until further notice.