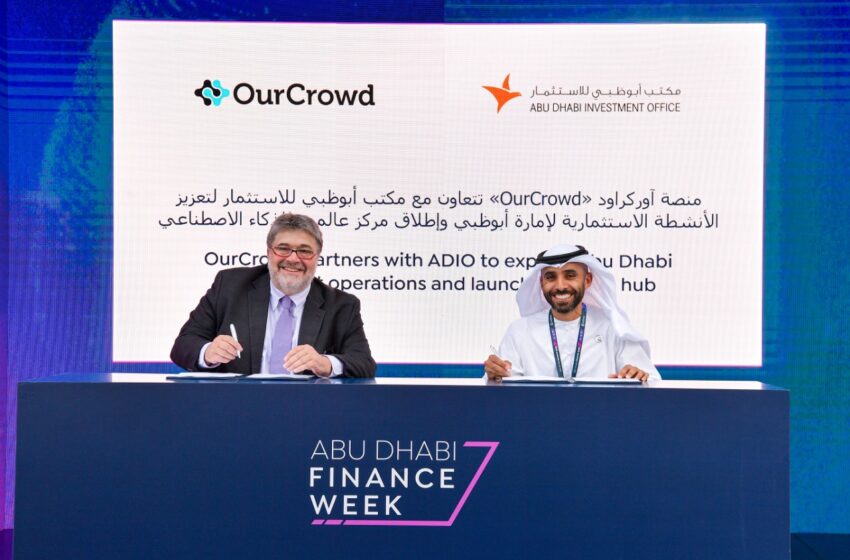 OurCrowd founder and CEO Jon Medved (left), signing an agreement with Acting director-general of ADIO, Abdulla Abdul Aziz AlShamsi to expand the company in the UAE with support from the Abu Dhabi Investment Office. (Courtesy/OurCrowd)

Two Israeli companies have announced opening their offices in the UAE as part of a $545 million government incentive program for innovation-focused firms in high-growth sectors such as agtech, IT, health services and biopharma, and financial tech and services (fintech).

Israel-headquartered global venture firm OurCrowd, which is more active in its business, on Wednesday said that it would be expanding its existing operations in the UAE with a venture capital (VC) office in Abu Dhabi and an artificial intelligence (AI) tech hub as part of a new agreement and would invest $60 million as part of its plans.

A day earlier, an Israeli fintech company – Liquidity Group – said it has signed an agreement to open an R&D center in the UAE. Both agreements were announced during Abu Dhabi Finance Week 2022.

OurCrowd and Liquidity are taking part in a program, launched in 2020 through the Abu Dhabi Investment Office (ADIO), that offers financial and non-financial incentives for global companies to expand their intellectual property in Abu Dhabi. The government says the program is meant to fuel the development and diversification of the economy.

The two Israeli outfits will join over three dozen companies from across the world that have taken part in the program over the past two years.

The UAE has recently positioned itself as “a gateway for financial services companies to expand, serving as a bridge between time zones, while providing a favourable regulatory environment via the Abu Dhabi Global Market (ADGM),” according to ADIO.

It may be mentioned that Israel and the UAE have re-established diplomatic ties in 2020 after signing the US-brokered Abraham Accords and OurCrowd has been among the first to apply for a license to operate in the Emirate.

OurCrowd Arabia opened in Abu Dhabi in 2021 and its new investment centre in the country will manage its deals there and also cater to its investors in the emerging market. In total, the firm expects to have a staff of 60 in the emirate.

“Following a global search for the most suitable location for IDI and OurCrowd’s new investment center, Abu Dhabi was by far the most fitting destination,” OurCrowd CEO and founder Jon Medved said.

He said the World Economic Forum has ranked the UAE first in the world in best e-infrastructure and macroeconomic stability, and the third most-trusted government.

“These factors, with numerous other advantages including global talent and market access, underscore why Abu Dhabi is now home to OurCrowd Arabia and OurCrowd’s new AI spinoff, and why we will continue to invest in the innovation infrastructure and talent in the country,” he said.

OurCrowd has announced earlier this month that its total investment commitments had crossed $2 billion, half of it only in the last three years. It has invested in 370 companies, with another 410 held through partner funds. It has seen 60 exits so far. It has about 220,000 registered investors from 195 countries so far.

According to Wall Street Journal, Liquidity Group Chief Executive Ron Daniel said the total investment in the R&D centre is about $50 million and would take the company’s employee count in Abu Dhabi to 75 from 35 currently by the end of next year, and to 200 by the end of 2024.

Daniel said Liquidity Group has already hired data sciences from all over the world to work in its Abu Dhabi offices, including from Jordan, Nigeria, Turkey and Singapore.

Abdulla Abdul Aziz AlShamsi, acting director general of the Abu Dhabi Investment Office, said his organization opened a branch in Tel Aviv last year to both increase understanding of Israeli businesses and help guide them toward expanding in Abu Dhabi.

“Israel is a key focus for Abu Dhabi, given the like-minded view of markets in both countries on utilizing innovation for impact,” he said.

AlShamsi said that his organization won’t have an equity stake in OurCrowd’s AI company, but is offering financial incentives, including rebates, to support the Israeli VC’s expansion in the emirate, the Wall Street Journal added.