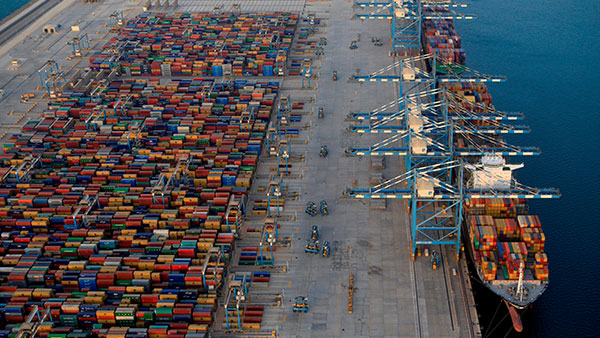 Announcing the company’s plans in September last year, ADQ CEO Mohamed Al Suwaidi said ADX was an ideal choice to give investors access to a high quality, high growth potential maritime and logistics leader due to its growing liquidity and resiliency.

The market capitalization of the ADX, the second biggest market in the Arab world, has crossed $413 billion and is supported by a series of listings and increased international investment. Around 70 companies are listed on the ADX and Abu Dhabi Ports Group is the latest to become a member of ADX.

At the end of the first ten months of 2021, the value of shares traded on the exchange reached $77.32 billion while the foreign net investment reached $1.66 billion.

Established in 2006, Abu Dhabi Ports Group is one of the largest holding companies in the Middle East with a broad portfolio of major enterprises spanning key sectors of the Emirate’s diversified economy.

The company reported a revenue growth of 22% year-on-year to$760 million in the first nine months of 2021 compared to $625 million in the same period last year, driven by volume growth, business diversification and new partnerships.

The shares of Abu Dhabi Ports Group will list under the trading symbol ADPORTS, the ADX said in a statement on Friday.

ADX is the major shareholder and owns a stake of 75.44% or 3.84 billion shares in Abu Dhabi Ports Group. The company’s shares will be listed in the first market — first category, said the bourse. However, the size of the listing will be announced later.

According to the company’s website, the share capital of the company was increased to $1.4 billion in 2022 from $1.05 billion by way of private placement, with the nominal value of each share priced at $0.27.

In April 2021, Abu Dhabi Ports raised $1 billion through the issuance of a 10-year bond that will be listed in London and Abu Dhabi. The bond issued under its Euro Medium Term Note Programme was more than 4.5 times oversubscribed.