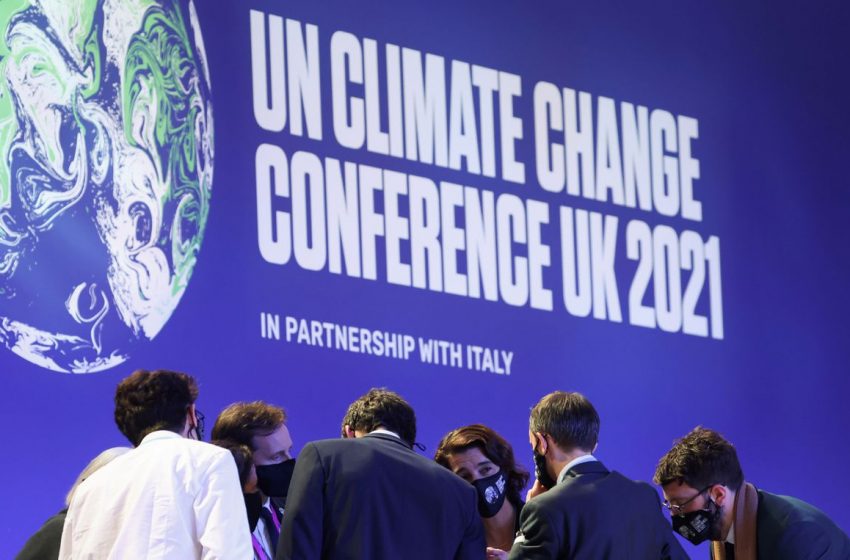 The deal announced late Saturday, ending two weeks of fraught negotiations between nearly 200 nations, pushes countries to do much more to curb climate-warming carbon emissions. That pressure will increasingly be imposed on investment and industry to bring emissions associated with their businesses in check.

The Glasgow pact also delivered a breakthrough on rules for governing carbon markets, and took aim at fossil fuel subsidies.

Beyond the political negotiations, the Glasgow gathering brought in many of the world’s top CEOs, mayors, and leaders in industries, including finance, construction, vehicles and aviation, agriculture, renewable energy and infrastructure.

Two separate investment conferences on the side of the U.N. climate summit touted profits to be made for those who meet environmental conditions for the cash. Many deals were announced, including plans for a standards body to scrutinise corporate climate disclosures that will challenge boardrooms.

With the pact reaffirming a global commitment to containing global warming at 1.5 degrees Celsius (2.7 Fahrenheit), along with “accelerated action in this critical decade,” boards can expect tougher national pollution policies across all sectors, particularly in transport, energy and farming.

That will leave the companies without a plan to adapt to a low-carbon economy looking exposed, U.N. High-level Climate Action Champion Nigel Topping said.

“If you haven’t got a net-zero target now, you’re looking like you don’t care about the next generation, and you’re not paying attention to regulations coming down the pipe,” Topping said. “Your credit rating’s at risk, and your ability to attract and keep talent is at risk.”

Adding to the pressure, financial services firms with around $130 trillion in assets have pledged to align their business with the net-zero goal. Increasingly, they will lean on the boards of corporate climate laggards.

The summit’s deal resolving rules for the global trading of carbon offset credits was applauded by business for its potential to unlock trillions of dollars in finance to help countries and companies manage the energy transition.

Observers said the agreed rules addressed the biggest worries and would likely prevent most abuses of the system.

The non-profit We Mean Business coalition, which works with corporates on climate, said the rules “have the potential to unleash huge investments”.

By putting in place the framework for a global trading system, the pact also brings the world closer to having a worldwide price on carbon – demanded as a priority by investors and companies before the talks.

A global price would allow companies to more accurately assess the value of assets, as well as costly externalities – driving more climate-aligned decisions on anything from where to build factories to which companies to buy or products to launch.

With carbon offsets tied to efforts to preserve nature, more than 100 global leaders during the conference pledged to halt and reverse deforestation by 2030. Companies and investors also said they would ramp up forest-protection efforts.

For the first time, the deal saw countries acknowledge that fossil fuels were the main cause of climate change, and called for an end to “inefficient fossil fuel subsidies”. It did not say how to determine if subsidies could be justified.

It singled out coal, the most polluting of the fossil fuels, though at the 11th hour switched from urging a “phase out” in coal-fired power to a “phase down”.

The change in wording, following objections by India, China and other coal-dependent nations, was seen by developing economies as an acknowledgement that industrialised nations are mostly responsible for the climate problem. But many in wealthy economies worried it could mean years more of unbridled emissions as developing nations grow.

Calling the move “dangerous and damaging for the climate,” Germany’s biggest industry association warned it could hobble its industries as they are forced to abandon the cheap fossil fuel international competitors can still use.

“This concentrates emissions in countries with less stringent climate measures and unilaterally wears on companies that already need to cope with large financial burdens,” the Federation of German Industry said Sunday.

Still, the very mention of coal and fossil fuels in the Glasgow pact was hailed as progress in U.N. climate talks, which for decades have skirted the issue.

Saker Nusseibeh, chief executive of the international business of asset manager Federated Hermes said the result would put pressure on some oil companies that were “not as forthcoming as others”.

He also said “coal companies will have to think very carefully about their future plans”.

Meanwhile, the world’s biggest economies are driving the shift.

The top two, the United States and China announced plans to cooperate on climate action, including bringing down emissions of the potent greenhouse gas methane.

Elsewhere, six countries, including France, joined the Beyond Oil and Gas Alliance, committing to halting new oil and gas drilling.

Twenty countries including the United States and Canada pledged to halt public financing of fossil fuel projects overseas, and 23 nations promised to phase out coal-fired power.

A number of companies in sectors including transport are already betting big on increased electrification, with U.S. car makers Ford (F.N) and General Motors (GM.N) among those saying they will phase out fossil fuel vehicles by 2040.

The Glasgow talks have “drawn attention to the great opportunities arising from a different form of development – stronger, cleaner, more efficient, more resilient and more inclusive,” said climate economist Nicholas Stern. The breakthroughs “seek to make clean and green production competitive in all these areas by 2030”.Reporting by Simon Jessop, Jake Spring and by Ross Kerber in Boston; Additional reporting by Victoria Waldersee in Berlin; Writing by Katy Daigle; editing by Barbara Lewis