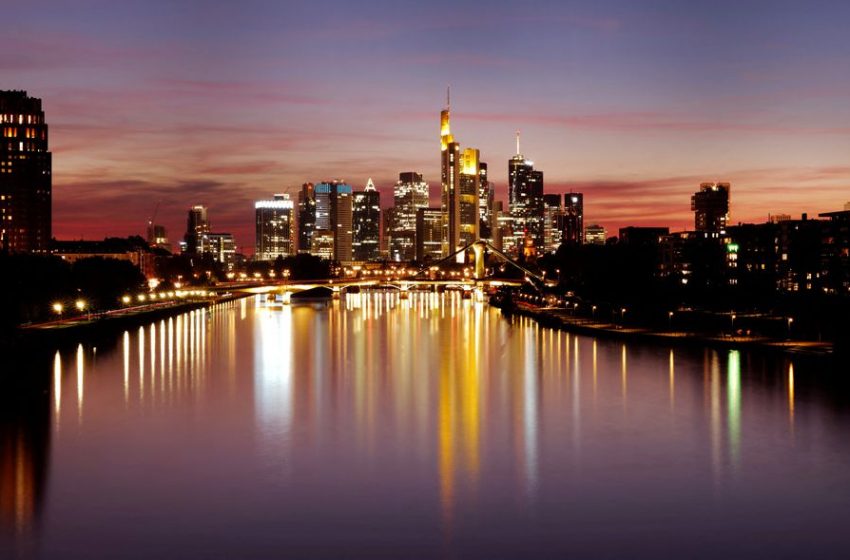 The skyline with the banking district is photographed in Frankfurt, Germany, September 22, 2021. REUTERS/Kai Pfaffenbach

Europe’s struggling banks entered 2022 on a wave of optimism not seen in more than a decade, with interest rates set to rise at last, the COVID-19 pandemic receding, and profits rising. The Ukraine crisis has swiftly knocked that flat.

Russia’s invasion has triggered an exodus of Western companies from the country, sent commodity prices soaring, hammered the euro and even threatened a global recession, just as Europe’s lenders looked poised to re-enter growth mode.

Investors had been cautiously returning to the sector, lured by cheap valuations and the prospect of excess capital set aside during the pandemic being returned as dividends and buybacks. read more

But capital distribution plans by Italy’s UniCredit (CRDI.MI) appeared to be hanging by a thread this week after it said a write-off of its Russian business would cost around 7.4 billion euros ($8.1 billion), the starkest indication yet of how the crisis is tarnishing the sector’s key appeal. read more

The STOXX index of European banks (.SX7P) has fallen 15% since the invasion on Feb. 24, against only a 5% fall in the benchmark STOXX index (.STOXX), making banking one of the worst performing sectors in the region.

European banks’ shares trade at a discount of more than a third to their U.S. peers, RBC Europe calculations show, and could yet fall further, with valuations still above troughs seen in previous crises.

Assessing the potential damage to individual banks is complicated, Eric Theoret, global macro strategist at Manulife Investment Management, said, because of the variety of ways they are exposed.

Some have holdings of Russian bonds and shares, others stakes in Russian banks, and others still sensitivity to secondary effects on Europe’s economy.

“European growth will take a hit, so will European banks exposed to Russia – that’s one of my biggest concerns,” Theoret said.

French, Italian and Austrian banks have the most direct exposure to Russia, according to analysis by Citi.

Those with the most to lose, via their stakes in local lenders, including UniCredit and France’s Societe Generale (SOGN.PA), could still cope with a complete write-off of those holdings, analysts said. read more

Societe Generale on March 3 said it could cope with being stripped of its 15 billion euro stake in local lender Rosbank. read more

Austrian lender Raiffeisen is looking into leaving Russia, where it is the country’s tenth largest bank by assets, Reuters reported earlier this month. read more

Potentially more damaging for European banks in the longer run are the risks of delayed central bank rate hikes, dwindling prospects of returning excess capital to shareholders, and the threat of stagflation, whereby prices rise as growth stalls.

Prior to the conflict, markets had priced in the European Central Bank’s deposit rate rising from -50 basis points (bps) to zero by year-end. They now expect only a 20bp increase, Berenberg analyst Michael Christodoulou said.

That hurts banks because higher benchmark rates help them generate greater profits on the spread between rates charged on lending and those paid out to depositors.

A likely freeze on corporate fundraising could also hit banks, such as Barclays and Deutsche Bank, which have significant capital markets businesses.

“Debt and equity issuance by clients will be put on hold until there is greater certainty, and this could negatively impact overall revenues in underwriting,” said Maria Rivas, senior vice president for global financial institutions at DBRS Morningstar.