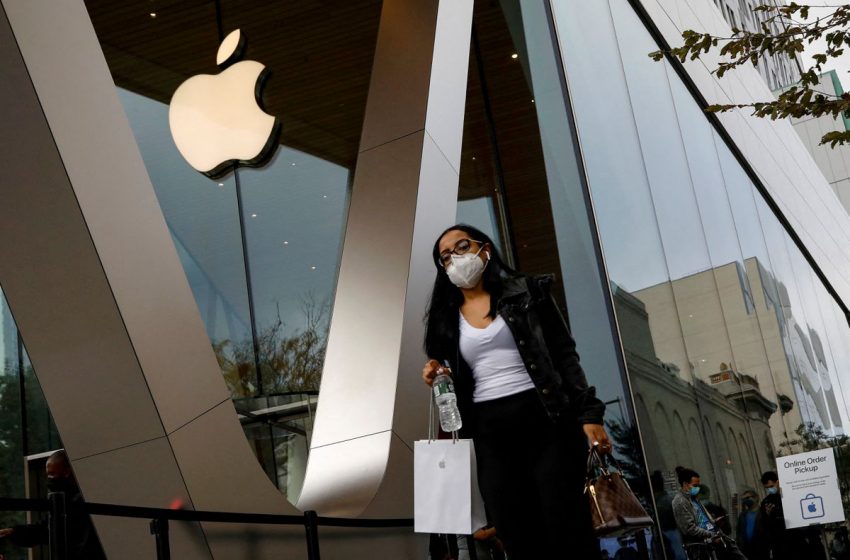 A customer exits after picking up Apple’s new 5G iPhone 12 that went on sale, as the coronavirus disease (COVID-19) outbreak continues, at an Apple Store in Brooklyn, New York, U.S. October 23, 2020. REUTERS/Brendan McDermid

A marked flattening in the U.S yield curve — with longer-dated borrowing costs taking a tumble — failed to lift tech shares on Monday. Instead, as the Omicron COVID variant gathered steam, consumer staples, pharmas and other defensives benefited, balking Apple of a $3 trillion market capitalisation.

With Wall Street futures pointing higher, and Apple’s Frankfurt-listed shares up almost 1%, Tuesday may well be the day the milestone is hit. read more

But in a week heavy with central bank meetings, data and expectations of hawkish policy turns, it’s anyone’s guess how market moves pan out.

Meanwhile, the Bank of England’s dilemma — to hike or not to hike — hasn’t gone away. November’s payrolls increase was the biggest since tax office records began in 2014, showing labour markets have withstood the end of a furlough scheme.

Online supermarket Ocado also provided a snapshot of the UK jobs market with a 3.9% fall in quarterly sales, due to labour shortages. read more

But with the spread of Omicron triggering work-from-home advice and other restrictions, the BoE may well choose to hold fire on Thursday read more .

Watch too for U.S. factory gate prices — a reliable forward indicator for CPI — out later on. Having started the year below 2%, November PPI will be above 9%, polls predict.

That data is unlikely to shake conviction the Federal Reserve, starting its two-day meeting on Tuesday, will accelerate its stimulus tapering and that the dot-plot chart of rate-setters voting intentions will show a more hawkish turn compared to the last meeting.

That’s keeping the dollar index at one week-highs and equity futures are higher. For now, let’s focus on emerging markets, where the rate hiking campaign continues unabated — Hungary is expected to raise rates by 30 basis points and Chile by as much as 125 bps. read more