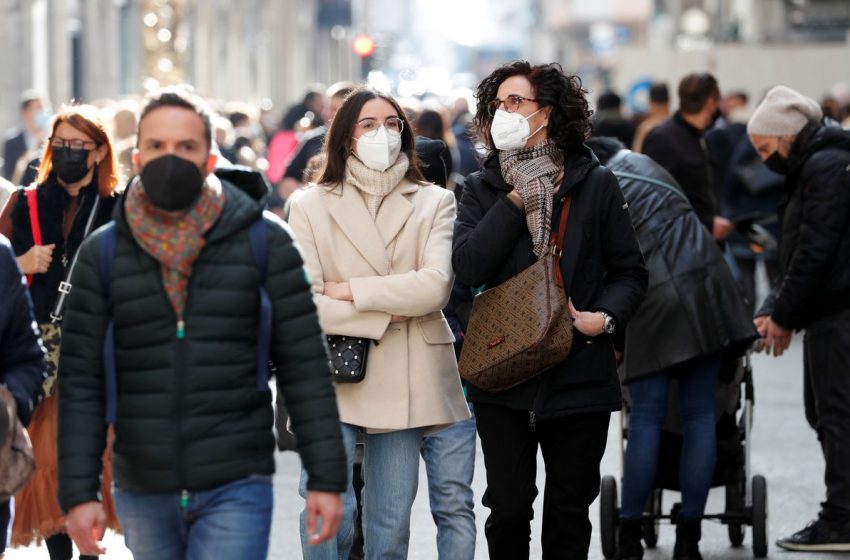 People wear protective masks as they walk down Via del Corso, Rome’s main shopping street, as the city makes masks mandatory outdoors in busy areas amid a rise in coronavirus cases, ahead of Christmas, in Rome, Italy, December 4, 2021. REUTERS/Remo Casilli

A look at the day ahead from Julien Ponthus.

Buying the dip triggered by the Omicron COVID-19 variant across global markets has proven a costly strategy so far. But some investors seem determined to have another go.

European and U.S. stocks futures are trading sharply higher after ending last week on a sour note and notwithstanding a dismal day in Asia where an MSCI index of Asia-Pacific shares outside Japan (.MIAPJ0000PUS) lost about 0.9%.

The region has seen a series of corporate setbacks after ride-hailing giant Didi (DIDI.N) decided to withdraw from the New York stock exchange last week.

Shares in China Evergrande (3333.HK), the world’s most indebted developer, plunged 14% after it said there was no guarantee it would have enough funds to meet debt repayments.

Another giant, Alibaba (9988.HK) dropped 5% after announcing it would reorganise its international and domestic e-commerce businesses. And U.S. regulatory opposition to the sale of Softbank-owned chip firm Arm pushed the Japanese conglomerate 8% lower (9984.T) read more .

But the mood is lighter already across Europe, allowing 10-year Treasury yields to claw back some of Friday’s falls which took them below 1.4% for the first time since late September.

There are five trading sessions left before Friday’s U.S. consumer price report which some reckon will provide the green light for the Federal Reserve to accelerate its tapering of bond purchases.

Oil prices too rose by more than $1 a barrel after Saudi Arabia raised prices for its crude sold to Asia and the United States read more .