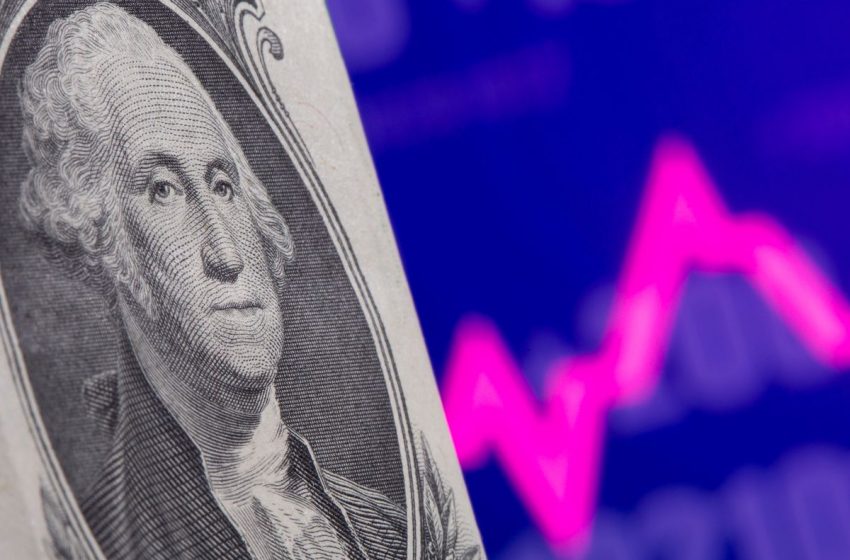 A U.S. one dollar banknote is seen in front of displayed stock graph in this illustration taken May 7, 2021. REUTERS/Dado Ruvic/Illustration

LONDON, Nov 23 (Reuters) – The dollar index reached new 16-month highs and its strongest in more than four years versus the yen after Federal Reserve Chair Jerome Powell was picked for a second term, reinforcing market expectations that U.S. interest rates will rise in 2022.

Currency markets have been mostly driven in recent months by market perceptions of the different paces at which global central banks reduce pandemic era stimulus and raise rates.

“The decision removes one source of uncertainty for financial markets and favours policy continuity at the Fed,” wrote MUFG currency analyst Lee Hardman in a note to clients.

“We expect US yields and the US dollar to remain under upward pressure in the near term while US activity and inflation data is surprising to the upside.”

Commerzbank’s head of FX and commodity research, Ulrich Leuchtmann, said that the decision was beneficial for the dollar because it showed President Joe Biden respecting the Federal Reserve’s independence from government. read more

“Biden has proved to be principled with Monday’s nomination,” he wrote in a note to clients.

Versus Japan’s yen, the dollar rose to its highest in four and a half years, as investors expected U.S. interest rates to diverge from those in Japan.

The Japanese currency is sensitive to moves in U.S. Treasury notes, and two-year U.S. Treasury yields rose 8.5 basis points on Monday to their highest since early March 2020.

The euro has lost 2.6% so far this month, hurt by a combination of the European Central Bank’s dovish monetary policy stance and, more recently, a resurgence of COVID-19 cases in Europe.

The World Health Organization warned earlier this month that current transmission rates in 53 European countries are of “grave concern” and Germany’s health minister has called for further restrictions on public spaces. read more

But material shortages and supply chain issues, combined with higher energy and wage bills, led to an unprecedented rate of cost inflation which in turn led many firms to raise their own charges to a record degree, the survey showed. read more

Turkey’s lira weakened to a new record low of 12 versus the dollar . This was its eleventh record low in as many days, after President Tayyip Erdogan defended recent rate cuts and vowed to win an “economic war of independence”. read more

The Reserve Bank of New Zealand is expected to deliver a 25 basis point rate hike on Wednesday.

In cryptocurrencies, bitcoin was just below $56,000. Earlier this month it had hit a new all-time high of $69,000 .Reporting by Elizabeth Howcroft; Editing by Alexander Smith