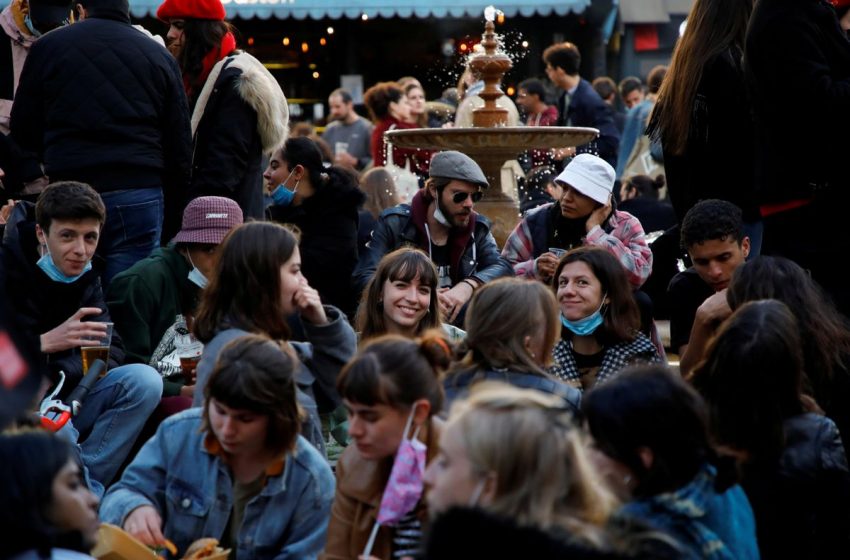 People enjoy an evening drink at Place de la Contrescarpe in Paris as cafes, bars and restaurants reopen after closing down for months amid the coronavirus disease (COVID-19) outbreak in France, May 19, 2021. REUTERS/Sarah Meyssonnier/File Photo

LONDON, Jan 3 (Reuters) – Manufacturing activity in the euro zone remained resilient at the end of 2021 as factories took advantage of an easing in supply chain bottlenecks and stocked up on raw materials at a record pace, a survey showed.

The global coronavirus pandemic had left factories struggling to get the materials they need and sent costs soaring, but a tentative easing of the supply issues led to a marked decrease in price pressures.

An index measuring output, which feeds into a composite PMI due on Wednesday and seen as a good guide to economic health, held steady at November’s 53.8.

“It has been an incredibly challenging period for euro zone manufacturers this second half of 2021, but the latest survey data hasn’t spoiled the festive cheer too much,” said Joe Hayes, senior economist at IHS Markit.

“We’re seeing some tentative, but very welcome signs that the supply chain crisis which has plagued production lines all across Europe is beginning to recede. Although what gains to be had were only marginal … PMI data showed stocks of purchases rising at a survey-record rate in December”

That easing meant the input prices index sank to an albeit still high eight-month low of 86.7 from 88.9, allowing factories to raise their prices at a much slower pace than in November.

The European Central Bank took another small step in rolling back crisis-era stimulus last month but raised its inflation projections and now sees it at 3.2% this year, well above its 2.0% target. Reporting by Jonathan Cable; Editing by Hugh Lawson