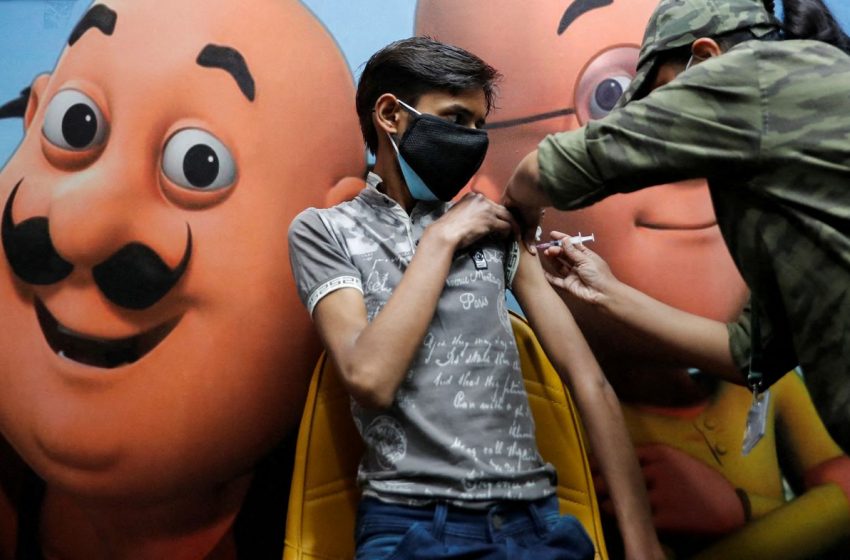 A boy receives a dose of the COVAXIN coronavirus disease (COVID-19) vaccine manufactured by Bharat Biotech, during a vaccination drive for children aged 15-18 in New Delhi, India, January 3, 2022. REUTERS/Adnan Abidi

Jan 3 (Reuters) – Here’s what you need to know about the coronavirus right now:

China’s plans to prevent a COVID-19 outbreak during its upcoming Winter Games by sealing all participants inside a “closed loop” will be tested by the highly infectious Omicron variant. Restrictions at Games venues in Beijing and Zhangjiakou in neighbouring Hebei province will be much tighter than those during last summer’s Tokyo Olympics.

Olympic participants must consistently test negative before being allowed to board specially arranged flights to Beijing. On arrival, participants must be vaccinated or face three weeks of quarantine. Everyone will be tested daily. However, such tests cannot be relied on to detect cases during the virus’ incubation period, and organisers have acknowledged that they expect a “certain number” of COVID-19 cases given the large number of international arrivals. read more

Two people who posthumously tested positive for the highly contagious Omicron variant of the coronavirus appear to be the first such reported deaths in the country, Yonhap news agency reported on Monday.

Officials are still investigating the exact cause of death for the two patients, who were both in their 90s, Yonhap reported, citing health authorities in the city of Gwangju. read more

Australia to push ahead with reopening amid record cases

Australia’s government said the milder impact of the Omicron strain of COVID-19 meant the country could push ahead with plans to reopen the economy even as new infections hit a record of more than 37,000 and the number of people hospitalised rose. Record daily case numbers were reported on Monday in the states of Victoria, Queensland, South Australia and Tasmania, as well as the Australian Capital Territory.

“We have to stop thinking about case numbers and think about serious illness, living with the virus, managing our own health and ensuring that we’re monitoring those symptoms and we keep our economy going,” Prime Minister Scott Morrison told Channel Seven. Health Minister Greg Hunt said the advice to the government was that the Omicron strain was more transmissible but also milder than other variants, which reduced the risk to both individuals and the health system. read more

Omicron-related disruptions cause over 4,000 flight cancellations

Over 4,000 flights were cancelled around the world on Sunday, more than half of them U.S. flights, adding to the toll of holiday week travel disruptions due to adverse weather and the surge in coronavirus cases caused by the Omicron variant. The flights cancelled by 8 pm GMT on Sunday included over 2,400 entering, departing from or within the United States, according to tracking website FlightAware.com.

U.S. airline cabin crew, pilots and support staff were reluctant to work overtime during the holidays, despite offers of hefty financial incentives. Many feared contracting COVID-19 and did not welcome the prospect of dealing with unruly passengers, some airline unions said. read more

India is set to launch a vaccination drive for children in the age group of 15 to 18 years from Monday and state governments were gearing up to administer doses at schools, hospitals and through special camps.

India reported more than 27,000 new COVID-19 cases on Sunday, with infections sharply rising for a fifth consecutive day, but the chief minister of the capital New Delhi said there was no need to panic, citing low hospitalisation rates. read moreCompiled by Karishma Singh; Editing by Sam Holmes