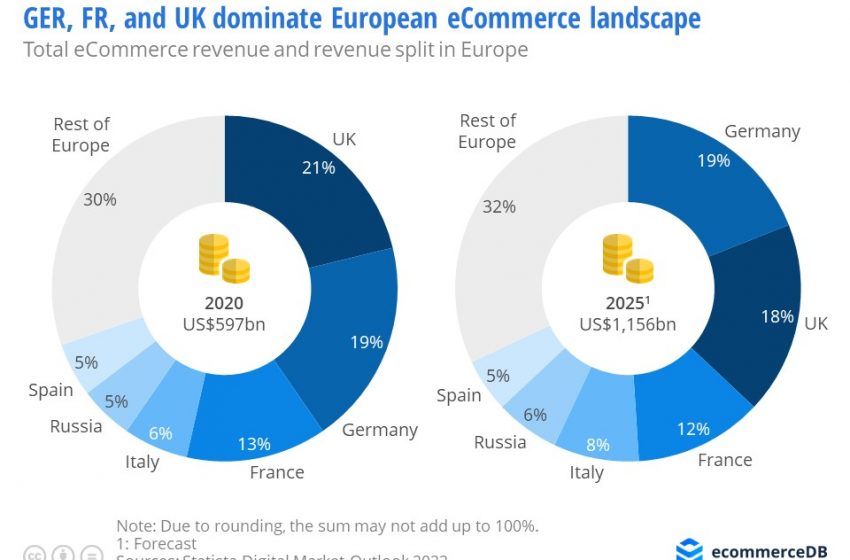 Europe is one of the strongest economic regions in the world and the Gross Domestic Product (GDP) OF THE European Union (EU) alone was around $15.21 trillion in 2020.

This made it follow closely behind the two globally leading countries – China and the United States – in GDP terms.

With an average yearly revenue growth of 17% between 2019 and 2025, the e-commerce market in Europe is projected to continue developing strongly and grow to $1.2 trillion of e-commerce revenues by the middle of the decade.

While countries such as Serbia and Turkey are expected to grow faster than all other European countries, Germany is expected to outpace the UK and become the continent’s largest e-commerce market by e-commerce revenue in the next four years.

As in many other highly industrialized regions, the services sector dominates the economic output in Europe.

Over the past few years and especially since the coronavirus pandemic disrupted consumer habits and economic structures across the continent had one branch in the services sector, e-commerce, gained more importance than ever.

Online sales contribute an increasing share to total retail sales on the European continent, amounting to 19% in 2021 in Central and Western Europe, for example, according to the Statista Digital Market Outlook. This is a rise of 6 percentage points compared to pre-COVID-19.

Although smaller countries are gaining ground economically, the overall situation in European e-commerce is projected to remain rather stable in the next few years. The three leading countries are forecast to stagnate or lose between 1 and 3 percentage points by 2025 and the smaller countries will slightly catch up accordingly.

While the UK is forecast to leave the lead as Europe’s biggest e-commerce market to Germany, the top 3 taken together will still produce close to half of all e-commerce revenues generated in Europe in 2025.

The start-up industry in the field of e-commerce and retail seems especially vibrant in the UK, according to StartupBlink data from December 2021.

With a total of 435 new businesses founded in the retail sector in 2021, the UK registered more than twice as many start-ups as economically strong Germany. France and Spain were home to 143 and 117 new e-commerce and retail businesses in 2021, respectively.