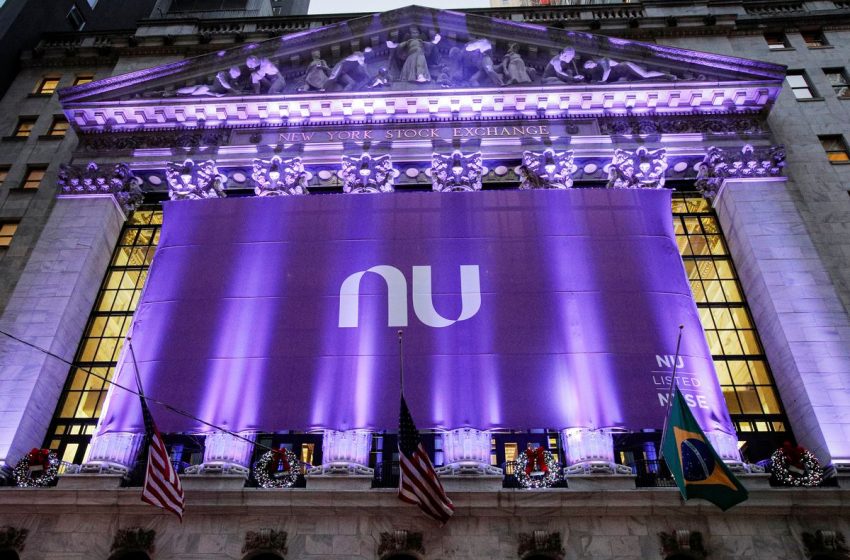 A banner for Nubank, the Brazilian FinTech startup, hangs on the facade at the New York Stock Exchange (NYSE) to celebrate the company’s IPO in New York, U.S., December 9, 2021. REUTERS/Brendan McDermid

The fintech debuted on the New York Stock Exchange less than two months ago as Latin America’s most valuable financial institution, worth $52 billion. Although its shares have taken a hit since then, Velez said the company – whose 48 million clients make it one of the world’s largest digital banks and which recently expanded in Mexico – is well-positioned for growth.

Velez said he expects the ratio of nonperforming loans (NPL) to rise this year as Brazilian consumers struggle with high inflation, rising interest rates and a sluggish economy.

But he sees Nubank keeping its NPL ratios below the market average due to its advanced use of data for underwriting policies. Nubank’s 90-day default ratio for credit cards is 3.3%, compared with the industry average of 4.8%.

The riskier outlook may even present an opportunity for faster growth at Nubank, Velez added in a video interview with Reuters on Tuesday. Funded with retail deposits, Nubank does not depend on credit markets and has a large cash position since its $2.6 billion initial public offering (IPO) in December.

“We might have actually have an opportunity to accelerate and take even more [market] share and leave interest rates even lower to make our products much more competitive,” Velez said. The short duration of the bank’s credit portfolio – six weeks for credit card loans and four to six months for personal credit – also allows better risk assessment, he said.

Expanding Nubank’s credit portfolio is seen by analysts as the key to reaching profitability. According to estimates by Morgan Stanley analysts in a recent report, Nubank obtains less than 200 reais ($37.67) in annual revenue from each active client, whereas its largest rival, Itau Unibanco Holding, gets more than 1,200 reais.

The most profitable credit products for retail banks are mortgages, followed by payroll loans and personal loans, according to Morgan Stanley.

Nubank is looking at ways to start offering payroll loans, and also plans to expand home equity and auto equity credit lines offered by partner Creditas to its clients.

Velez said he was not surprised that Nubank’s U.S.-listed shares have retreated by more than 20% since their stock market debut on Dec. 9, given the broader rout in technology stocks.

“We have been telling investors to expect volatility. Brazil and Latin America are volatile,” he said.

Velez said a rise in interest rates in the United States and Brazil will affect Nubank stock in the short term, but the longer-term growth trend will not be impacted as customers look for more inexpensive financial services.

Nubank has grown through two recessions, a presidential impeachment and the COVID-19 pandemic in Brazil, Velez added.

Another channel for boosting revenue is to sell customers more investment products through its broker Nu Invest, the result of acquiring broker Easynvest in September 2020.

Nubank is also expanding services for clients in its app, offering e-commerce, gaming and insurance mostly through partners in which the digital bank has a stake through its venture capital fund.

A fierce defender of purely digital banking, Velez concedes that Nubank will need to consider some kind of physical presence in the future to serve specific clients.

“Eventually, if we want to go through on certain segments, we might need to consider having some kind of offline presence to be able to serve our customers better,” he said, citing high net worth individuals and clients shopping for mortgages.

The fintech might even consider a partnership with a brick-and-mortar bank to offer mortgages, Velez added. “We would be very happy to partner with any of the large traditional banks.”

Closer on the horizon, Nubank is preparing to launch checking accounts in Mexico this year, after it received regulatory approval for its acquisition of local lender Akala.

The growth of the Mexican operation has been a pleasant surprise, Velez said, making Nubank the country’s largest credit card issuer of new cards issued monthly, with 760,000 clients.

Mexico has lower financial penetration rates and less competition than Brazil, he added.

The bank’s expansion in the CEO’s native Colombia will take longer, he said, as Nubank is still in the early stages of obtaining its operating licenses.