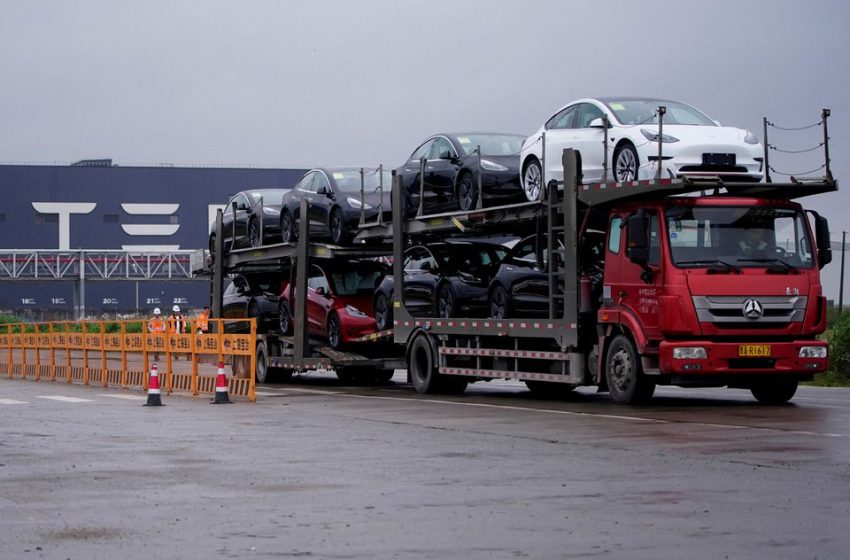 A truck transports new Tesla cars at its factory in Shanghai, China May 13, 2021. REUTERS/Aly Song

Electric vehicle giant Tesla (TSLA.O) is suspending production at its Shanghai factory for two days, according to a notice sent internally and to suppliers, as China tightens COVID restrictions to curb the country’s latest outbreak.

The Shanghai factory runs around the clock, and suppliers and Tesla staff were told on Wednesday in the notice, reviewed by Reuters, that production would be suspended for Wednesday and Thursday.

It did not give a reason for the stoppage at the plant, also known as the Gigafactory 3, which makes the Tesla Model 3 sedan and the Model Y crossover sport utility vehicle.

Many cities across China, including Shanghai, have been rolling out strict movement controls to stem the country’s largest COVID-19 outbreak in two years. The measures have also caused factory shutdowns in parts of the country, putting pressure on supply chains. read more

Its Shanghai factory produces cars for the China market and is also a crucial export hub to Germany and Japan. It delivered 56,515 vehicles in February, including 33,315 for export, according to the China Passenger Car Association.

That amounts to an average of around 2,018 vehicles a day.

It was not immediately clear whether the suspension of work would apply to other plant operations over the two days.

Two people briefed on the notice said they understood it applied to Tesla’s general assembly lines. They declined to be identified because the information was not public.

The notice did not specify whether the measures would correspond to a loss of production, or whether Tesla could make up for any lost output.

Authorities in Shanghai have asked many residents not to leave their homes or work places for 48 hours to as long as 14 days as they conduct COVID tests or carry out contact tracing.

In a separate notice issued on Wednesday that was also seen by Reuters, Tesla asked suppliers to estimate how many workers were needed to achieve full production and to provide details of workers affected by COVID restrictions.

It also asked suppliers to prepare workers to live, sleep and eat at the factories in an arrangement similar to China’s “closed-loop management” process. Apple supplier Foxconn (2317.TW) was allowed to resume some operations at its Shenzhen campus on Wednesday after it set up such an arrangement. read more

Tesla was alerted by one supplier last weekend that its production had been affected by COVID measures, said a person familiar with the matter. That supplier told Tesla that its stockpiles could only last for two days, the person said.