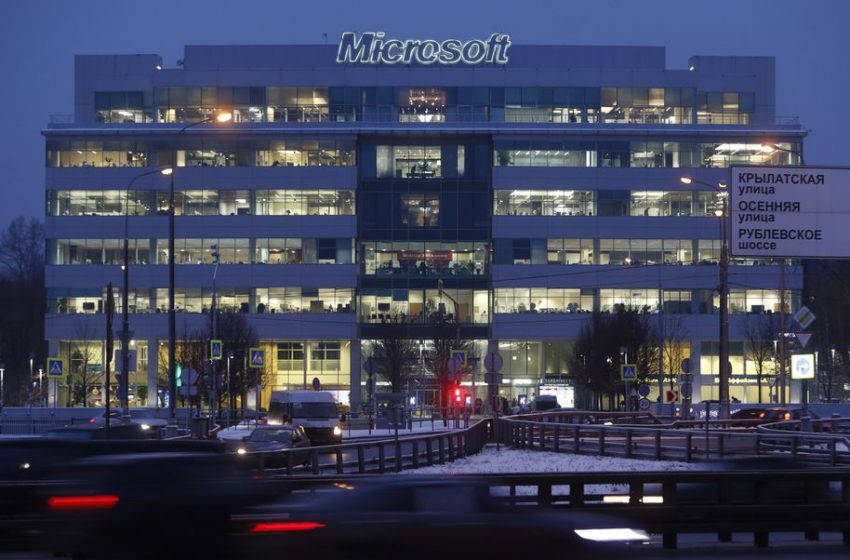 A general view shows a building, which houses the office of Microsoft company, in Moscow, Russia January 15, 2018. REUTERS/Sergei Karpukhin

WHAT IS UKRAINE DEMANDING?

The Ukrainian ministry of digital transformation wants North American and European technology companies to completely pause any dealings with Russian clients, potentially disrupting Russia’s economy and forcing the Kremlin to reconsider what it has called a “special operation” in Ukraine.

Some companies like Microsoft have stopped accepting new customers in Russia since the invasion began last month. But many have not ended deals with existing customers, except for those targeted by new sanctions and export controls.

WHAT ROLE DO WESTERN COMPANIES PLAY IN RUSSIA’S IT SYSTEMS?

Russian companies and government agencies long have relied on technology developed by the West as the basis for their owned-and-operated IT systems. Servers from International Business Machines Corp (IBM.N), Dell Technologies Inc (DELL.N) and Hewlett Packard Enterprise Co (HPE) (HPE.N) top the market in Russia.

Vendors cannot remotely turn off some of the technology. But there are options to choke clients’ systems.

Banking, telecom, transport and other organizations in Russia could be hampered if vendors stop providing replacement parts, security patches, software updates and technical support, according to two former senior salespeople for IBM in Eastern Europe.

Clients could be forced to find alternatives, even pen-and-paper bookkeeping, if services go offline or degrade due to a lack of updates.

HOW WOULD A WESTERN CLOUD SHUTDOWN AFFECT RUSSIA?

Russian companies have been largely reluctant to rely completely on cloud services, especially from U.S.-based providers such as Microsoft Azure and Alphabet Inc’s Google Cloud (GOOGL.O), according to IDC analyst Philip Carter. As a proportion of overall domestic IT spending, cloud accounts for 5% in Russia compared with 19% in the United States, Carter said.

As a result, Russian companies dropped from the cloud would not be overly crippled, he said.

Still, the Russian cloud market has grown fast over the last two years, with the pandemic driving commerce online, according to researchers.

Microsoft has the largest market share in Russia at 17%, followed by Amazon.com Inc’s cloud unit at 14% and IBM at 10%, according to 2020 estimates from IDC. Yandex NV (YNDX.O), a Russian company, comes in fourth with 3% market share.

But IDC has said Russia and Ukraine combined only account for 5.5% of all information and communication technology spending in Europe and 1% worldwide.

WHAT HAVE THE WESTERN COMPANIES SAID?

Salesforce on Monday said it had began exiting its customer relationships in Russia, which it said added up to a small, non-material number.

Other companies declined to comment on whether they are considering dropping existing clients.

Amazon Web Services has said its biggest customers in Russia are companies headquartered elsewhere, and that it has had a long-standing policy of not doing business with the Russian government.

IBM and Oracle have said they suspended all business in Russia, and IBM added that it does not do business with Russian military organizations. HPE, Dell, SAP and Microsoft have said they are stopping sales. Google Cloud did not respond to a request for comment.

WHO COULD BENEFIT IF WESTERN COMPANIES BOW OUT?

Russian companies could turn to homegrown workplace software such as MyOffice or local cloud providers including Yandex and ActiveCloud. Prices and quality may be less favorable, though, IDC’s Carter said.

Still, any use of Western components in their operations could complicate Russian sales under trade curbs the United States recently imposed.