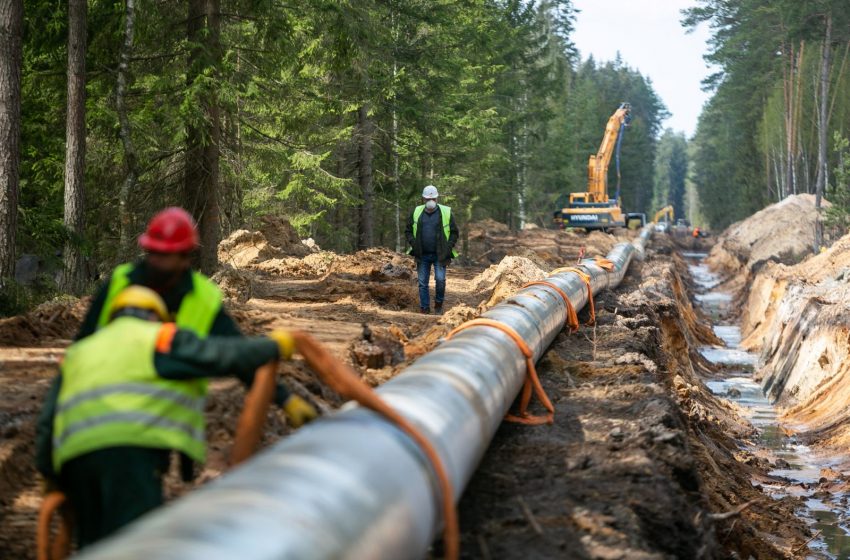 Lithuania, which became the first country in the 27-member European Union (EU) to stop importing Russian gas from April 1, after Russia invaded Ukraine, is making alternate arrangements to meet its domestic demand for natural gas.

The first and foremost step has been the opening of $541.13 million Gas Interconnection Poland–Lithuania (GIPL) pipeline connecting Poland and Lithuania on 1 May 2022, to enable natural gas trade cooperation by distributing natural gas produced by Lithuania to Poland and vice versa.

The total length of the pipeline is 851 km and of this, 508 km is in Poland and the remaining 343 km is in Lithuania. This natural gas infrastructure will not only connect Polish and Lithuania but as well as Baltic and Finnish natural gas transmission systems with the European Union (EU) system.

The project is carried out by Lithuanian and Polish natural gas transmission system operators Amber Grid and GAZ-SYSTEM. The European Commission has recognized the GIPL project as a major infrastructure gas supply security contributing significantly to the EU’s energy security.

With this pipeline, the two countries will keep each other’s natural gas supplies safe. The construction process has started in early 2019 and will be inaugurated earlier than scheduled. Lithuania also took several steps to maintain the availability of natural gas to anticipate shortages due to the end of natural gas imports from Russia.

It may be recalled that the Lithuanian Ministry of Energy has announced that the country will stop importing Russian gas from April 1 and will increase the LNG production from the state-owned LNG terminal in the port city of Klaipeda as an alternative.

Earlier, Lithuania was getting gas via the Lithuanian-Belarus gas interconnection. Lithuania plans to increase gas production in Klaipeda to achieve complete independence in their domestic gas supply without having to rely on gas imports from other countries, especially Russia.

Lithuania’s Minister of Energy Dainius Kreivys said that this was a turning point in the history of his country’s energy independence: “We are the first EU country to gain independence from Russian gas supplies, and this is the result of a multi-year coherent energy policy and timely infrastructure decisions,” he said.

In 2021, European imports of gas from Russia were more than 380 million cubic metres (mcm) per day via pipeline, totaling about 140 bcm for the year, according to the International Energy Agency (IEA). An additional 15 bcm was delivered in liquified natural gas (LNG) form. Russia accounted for about 45% of the EU’s gas imports and 40% of its entire gas consumption.

In 2015, nearly 100% of Lithuania’s gas supplies derived from imports of Russian gas but the situation has changed drastically over the past years after the country built an off-shore LNG import terminal which was launched in 2014 in Klaipeda.

Last year, some 26% of Lithuania’s gas supplies derived from deliveries from a Russian gas pipeline while 62% came via Klaipeda’s LNG terminal and the remaining 12% were imported from a gas storage in neighboring Latvia.

Baltic neighbors Latvia and Estonia are also heavily dependent on Russia’s gas but the operator of Latvia’s natural gas storage said none of the three Baltic states were importing Russian gas as of April 2.

The Estonia government has proposed building a LNG terminal jointly with Latvia and Nordic neighbor Finland in the Estonian port town of Paldiski, which is not far from the capital, Tallinn.