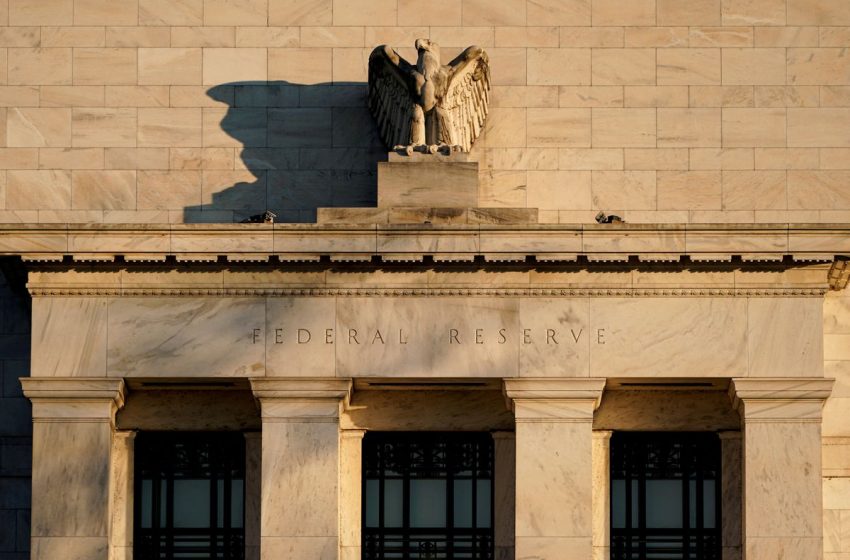 The Federal Reserve building is seen before the Federal Reserve board is expected to signal plans to raise interest rates in March as it focuses on fighting inflation in Washington, U.S., January 26, 2022. REUTERS/Joshua Roberts/

A look at the day ahead in markets from Tommy Wilkes.

Barring a last-minute rebound, global stock markets will end this week lower — for European stocks that’s the first weekly drop in four — with investors getting nervous about the speed at which central banks will tackle inflation.

While government bond yields have been marching higher throughout March and April, stocks have been shrugging off tightening fears and rising rapidly.

The tone of the Federal Reserve meeting minutes this week, in which 50 basis point hikes and a big $95 billion a month shrinkage in the balance sheet appear likely, seemed to shake investors out of their calm state of mind.

The European Central Bank followed with a more aggressive tone than expected in their own minutes. read more

This week’s rise in government bond yields — up more than 20 basis points for 10-year U.S. Treasuries — was punchy but in line with the recent dramatic price action.

But stocks dropped as investors focused on the likelihood that central banks will be hiking aggressively to tame inflation just as the war in Ukraine knocks global economic confidence. Warning signals for a potential recession in the euro zone and even the United States are flashing red.

Overnight there was some respite with Wall Street making a late recovery, and European markets have opened slightly higher.

The other big story for markets in the euro zone this week is Sunday’s first-round French election, where incumbent President Emmanuel Macron looks set for the fight of his life.

The tight French presidential race is adding to nerves and has sparked a selloff in French government bonds this week.

It has been a quiet week for corporate news with little in the way of earnings.