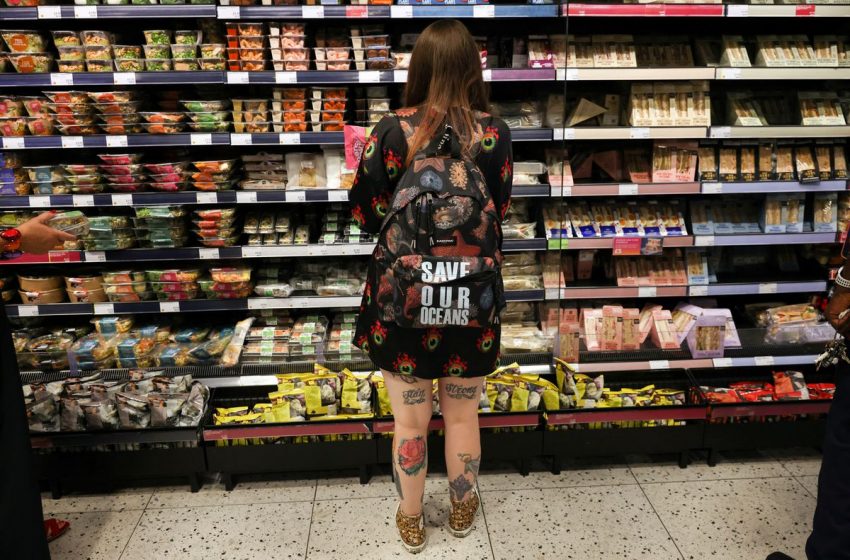 A person wearing a backpack with the slogan “SAVE OUR OCEANS”, looks at food goods in a shop as UK inflation heads towards 10% in London, Britain, June 16, 2022. REUTERS/Kevin Coombs

Rail strikes, the biggest in three decades, are thinning out office districts across Britain this week. Other professional groups, from barristers to postmen, also plan to hit the barricades in coming weeks to demand more pay read more .

Data on Wednesday shows why. Annual consumer inflation inched to a new 40-year high of 9.1% in May, heading for the 11% print the Bank of England forecasts by October.

It may heap pressure on the BoE to up its rate-hiking pace after its quarter-point move last week lagged more robust action from the U.S. Federal Reserve and others.

But sterling has fallen, keeping one eye on recession risks that could force the BoE to stay its hand in coming months. Indeed, UK manufacturers’ expectations for higher prices fell to a nine-month low in June, recent data shows read more .

And price pressures will force the Federal Reserve to opt for another 75 bps rate hike in July, then 50 bps in September, a Reuters poll predicts read more .

All eyes therefore are on Fed boss Jerome Powell, who will be on Capitol Hill later on Wednesday and again on Thursday to explain to Congress how he plans to tame inflation.

The fear of recession down the road is weighing on markets, reflected in falling bond yields, 10-year German and U.S. borrowing costs are down 7 bps. World stocks are sliding again and Wall Street futures are down more than 1%, threatening to reverse Tuesday’s firm close.

Yields spreads between Germany and southern Europe narrowed on Tuesday after ECB president Christine Lagarde reaffirmed this week a commitment to avoid “fragmentation”. But markets want to see action soon on that, especially after Lane said a 25 bps ECB hike was set in stone for July.