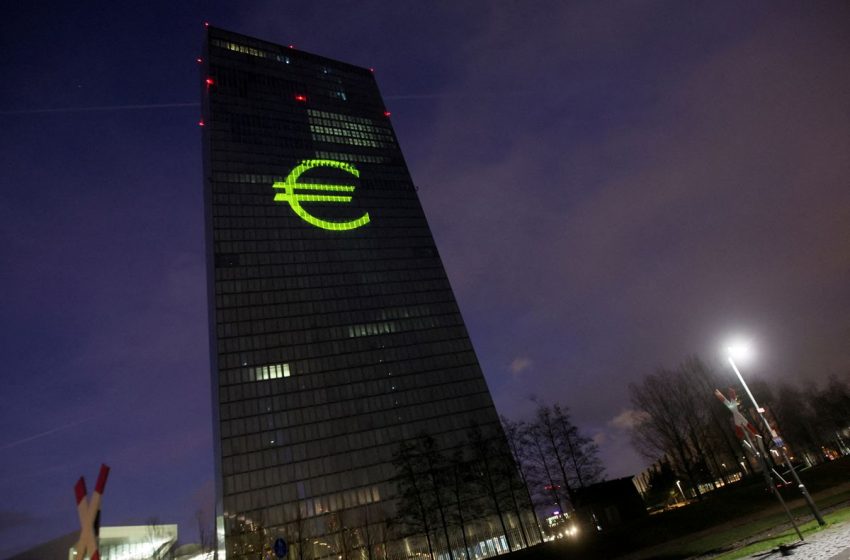 A Euro sign is seen moments before a symphony of light consisting of bars, lines and circles in blue and yellow, the colours of the European Union, illuminates the south facade of the European Central Bank (ECB) headquarters in Frankfurt, Germany, December 30, 2021. REUTERS/Wolfgang Rattay

The European Central Bank’s meeting last week turned out to be quite a policy pivot. read more

With euro zone inflation running above 5%, money markets had already been betting the ECB would wake up, smell the coffee and possibly signal when it might follow the U.S. Federal Reserve and the Bank of England in tightening policy.

But by opening the door to a rate hike in 2022, President Christine Lagarde unleashed a massive readjustment, with German 10-year government yields seeing their biggest jump since the March 2020 COVID-19 crash.

Quick take? Well, with the ECB also now on board to tighten policy, this looks like a new financial markets cycle.

“The times of low growth, low inflation, low rates and excess central bank liquidity are over in our view”, Berenberg analysts write.

All eyes will be on Lagarde when she addresses the European Parliament later on Monday. In the meantime, strategists are adjusting equity risk premium models to the paradigm shift.

Shares in European banks hit their highest since 2018 and the continent’s tech index is down 20% from its November highs.

Overall though, there seems no cause for alarm — 78% of S&P 500 earnings have beaten forecasts so far according to Refinitiv I/B/E/S. And the U.S. economy also created far more jobs than expected in January.

So despite a dip on Asian stocks earlier, European and U.S. futures indicate a cautiously optimistic mood. Clouded of course by the Ukraine diplomatic crisis and oil prices north of $90 a barrel.