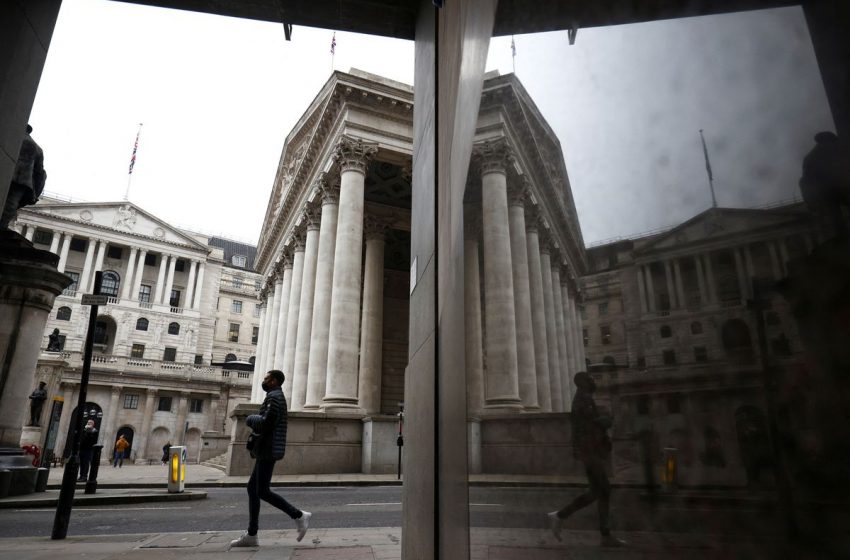 A person walks past the Bank of England in the City of London financial district in London, Britain, January 23, 2022. REUTERS/Henry Nicholls//File Photo

If you were hoping for calm before Thursday’s Bank of England and European Central Bank meetings, forget it.

U.S. stock futures are down sharply in early London trade — Nasdaq futures are sliding 2% with tech stocks globally in the doldrums.

That’s all before the BoE looks set to hike its key rate 25 basis points to 0.5% — the threshold at which it has said it will start unwinding its 895 billion pound ($1.2 trillion) quantitative easing programme.

For some, markets are underestimating the risks of so called quantitative tightening, QT for short. Others note the BoE’s ability to surprise, noting November when markets were positioned for a rate hike and the BoE left rates unchanged and then December, when markets expected no move and the BoE hiked.

The takeaway? The BoE’s decision at 1200 GMT may not bring what we all expect.

The ECB meanwhile is not expected to change policy on Thursday. But ECB President Christine Lagarde may have to acknowledge that inflation could stay high for longer than it had projected, a signal that may be taken by some as a hint at a faster exit from stimulus.

Data on Wednesday showed a 5.1% January inflation print, the highest ever for the euro zone.

Markets price 30 bps of tightening by year-end; the ECB insists a move in 2022 is unlikely.

If Lagarde admits price pressures have been underestimated, rate-hike bets could be bought forward, triggering an unwanted tightening of financing conditions.

Meanwhile data out this morning showed that Turkey’s annual inflation soared to near-50% and producer prices to more than 90%, heaping fresh pressure on the lira. read more