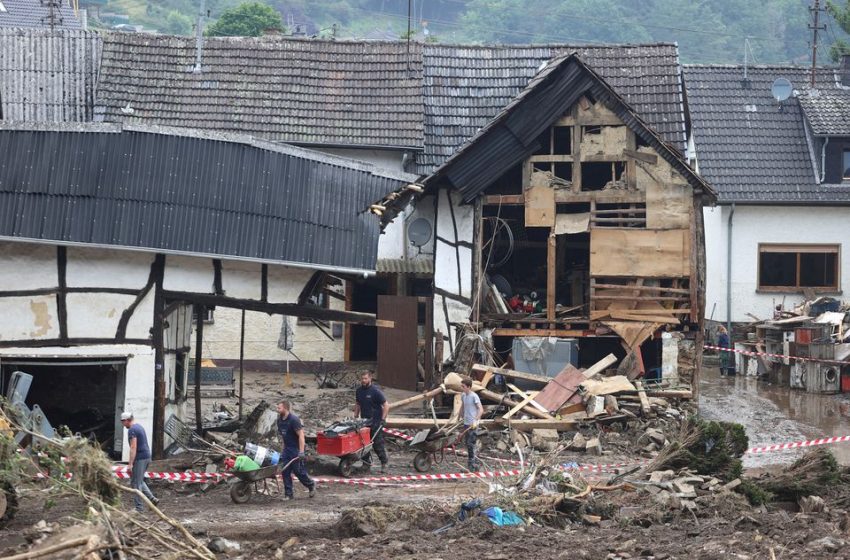 Residents remove rubble among the debris left over by the July 2021 extreme weather and lethal floods of the nearby Ahr river, in Schuld, Germany, July 17, 2021.REUTERS/Wolfgang Rattay

FRANKFURT, Jan 10 (Reuters) – Marked by devastating hurricanes and cold snaps in the United States, 2021 proved the second-most costly year on record for the world’s insurers, Munich Re said on Monday, warning that extreme weather was more likely with climate change.

Insured losses from natural catastrophes totalled around $120 billion last year, second only to the $146 billion in damages during the hurricane-ridden year of 2017.

The annual tally by Munich Re , the world’s largest resinsurer, is higher than an estimate of $105 billion that competitor Swiss Re published last month. read more

The U.S. – ravaged by dozens of tornadoes in December, and by Hurricane Ida and freezes in Texas earlier in the year – accounted for an unusually large portion of the losses, Munich Re said.

“The images of natural disasters in 2021 are disturbing. Climate research increasingly confirms that extreme weather has become more likely,” said Torsten Jeworrek, a member of Munich Re’s board.

Nearly 10,000 people died from natural catastrophes, in line with previous years. Total losses, including those not covered by insurance, were $280 billion, the fourth-highest on record.

Residents remove rubble among the debris left over by the July 2021 extreme weather and lethal floods of the nearby Ahr river, in Schuld, Germany, July 17, 2021.REUTERS/Wolfgang RattayRead Less

Hurricane Ida, damage from which stretched from New Orleans to New York, resulted in $36 billion in insured losses. The winter storm that primarily hit Texas resulted in around $15 billion in losses. Floods in Germany cost billions too.

“The 2021 disaster statistics are striking because some of the extreme weather events are of the kind that are likely to become more frequent or more severe as a result of climate change,” said Ernst Rauch, Chief Climate and Geo Scientist at Munich Re.

Many scientists agree that events in 2021 were exacerbated by climate change and that there is more – and worse – to come as the Earth’s atmosphere continues to warm through the next decade and beyond.

The costliest year on record was 2017, with hurricanes Harvey, Irma and Maria. Other severe years were 2011, when big earthquakes hit Japan and New Zealand, and 2005, when Hurricane Katrina ravaged New Orleans.

Insurers have in some cases been raising the rates they charge as a result of the increasing likelihood of disasters, and in some places have stopped providing coverage.

As insurers warn about climate change and the costs associated with it, they themselves are under pressure from activists to stop insuring dirty industries. Reporting by Tom Sims and Alexander Huebner, Editing by Miranda Murray, Kirsten Donovan