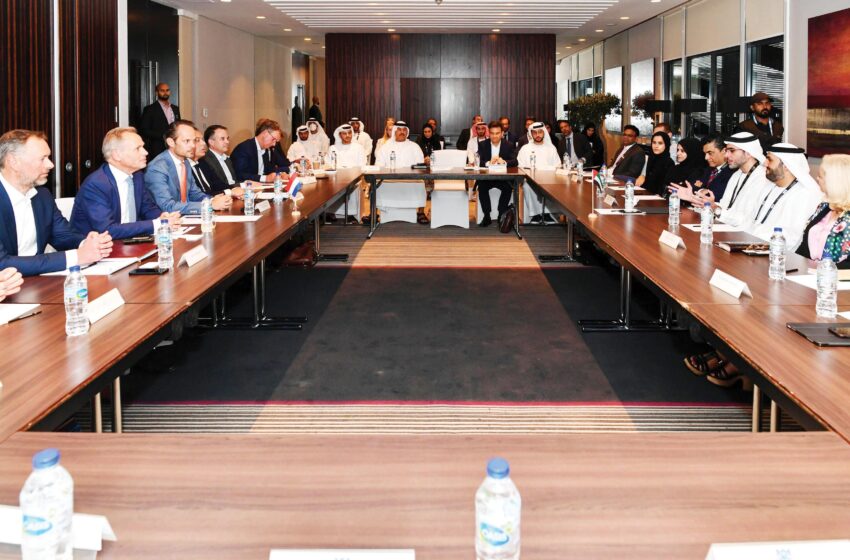 As a follow-up to the MoU signed in March this year, the UAE Ministry of Energy and Infrastructure held a meeting with a delegation from the Embassy of the Netherlands and discussed cooperation between the two sides in the energy sector.

Both sides discussed strengthening partnership in decarbonisation projects from the energy sector, and raising the level of hydrogen use within clean energy sources. The two parties also discussed opportunities for clean hydrogen trade between the two countries.

The meeting was held on the side lines of the ongoing Abu Dhabi International Petroleum Exhibition and Conference – ADIPEC 2022 – and was chaired by Sherif Al Olama, Undersecretary of the Ministry of Energy and Infrastructure for the Energy and Petroleum Sector, and Doi Bozeman, Deputy Head of the Acting Delegation of the Dutch Ambassador.

Yousef Al Ali, Assistant Undersecretary for the Electricity Sector in the Ministry of Water and Future Energy, and many officials from sides including those representing the energy sector in both countries, private companies and the academic sector were present.

The meeting reviewed the UAE’s efforts in developing hydrogen energy, especially the strategy followed in this field by Emirates and the Netherlands, the future of hydrogen energy, the UAE’s competitive position regionally and globally, its trends to achieve leadership in energy transfer, and the latest developments in the sector.

Speaking at the meeting, Sherif Al Olama said that the meeting was in continuation of the efforts of both countries to enhance the position of hydrogen as a low-carbon fuel, and to enhance bilateral relations in this vital sector.

The MoU aimed to enhance constructive cooperation in the field of hydrogen, which has become part of the basic strategic thinking of the energy sector, as it is one of the most important sources of clean energy, and its important role in supporting climate change issues, in addition to its ability to meet the increasing demand for energy and ensure its reliability.

He pointed out that as the world was striving to achieve energy transition by overcoming increasing difficulties, and there was an increase in dependence and development on the global hydrogen economy.

“The governments, investors, the private sector and civil society must work hand in hand to enhance their capabilities in the field of low carbon hydrogen to stabilize the green economy, expand the scope of transformation in the energy sector besides cooperating among various global partners, and injecting more investments,” he said.

Al Olama continued: “The UAE possesses natural resources, capabilities and expertise, which makes it one of the world’s leading countries in the field of energy. Practical steps have been taken in this field by launching the Emirates Energy Strategy 2050 in 2017, which targets a mix of renewable and clean energy sources to ensure a balance between economic needs. and environmental goals over the next three decades.”

Youssef Al Ali stressed that such global partnerships support the UAE’s goals in maximising benefits of the hydrogen sector, as well as promoting ambitions aimed at expanding clean energy production, and supporting the Paris Agreement on Climate Change.

“The UAE and the Netherlands have enjoyed friendly relations in the energy sector since the 1950s, and this cooperation in hydrogen will enable us to develop this partnership on the basis of common ambitions and mutual benefits,” Al Ali added.