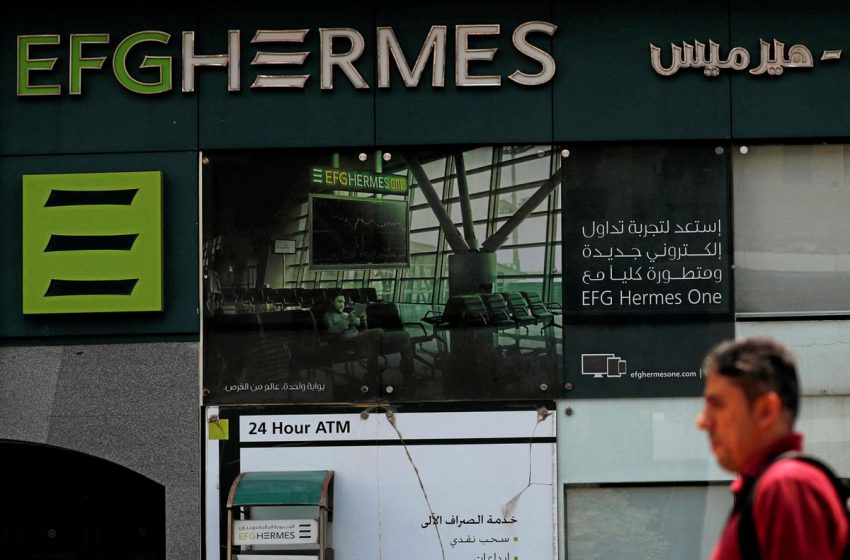 An Egyptian man walks past a branch of the EFG Hermes investment bank in Cairo, Egypt May 29, 2018. REUTERS/Amr Abdallah Dalsh/File Photo

The United Arab Emirates’ biggest lender may have to raise its bid to take a controlling stake in Egypt’s top investment bank EFG Hermes (HRHO.CA) given the latter’s outsized influence over Egypt’s financial markets and supercharged growth of its fintech businesses, industry players say.

FAB (FAB.AD) this month made a non-binding offer to buy at least 51% of EFG Hermes for 19 Egyptian pounds ($1.21) per share, which valued the Egyptian bank at nearly $1.2 billion, but most analysts value EFG in the 25-28 pounds range, as much as 47% above the current offer. read more

EFG controls roughly a third of traded volumes on Egypt’s stock exchange. Its size almost guarantees it a leading role on top deals in the country, including a planned pipeline of initial public offerings in state or military-owned companies.

Besides being by far the biggest investment bank, EFG also has unrivalled scale in Egypt’s non-banking financial services (NBFS) sector, as Egypt’s 100 million people are estimated to be among the world’s least banked.

“The opportunity for Egypt is significant,” said Basil Moftah, general partner at Global Ventures, which is pouring money into fintech.

Last year, total NBFS balances in Egypt surged 50.2% to 152.2 billion pounds ($9.72 billion), official data showed, as a young, increasingly tech-savvy population embraces options in digital finance while a slew of entrants vie for a slice of the market.

“You are just scratching the surface. There are still a lot of people who don’t have the products,” Moftah said.

Global Ventures has put over $30 million into Egypt and could invest between $100 million and $150 million in the country’s fintech space over the next three to four years, he said.

The Dubai-based investor has invested in Egyptian fintech firms such as Paymob and Sympl, which competes against EFG’s valU, the country’s leading buy-now pay-later firm.

“If you IPO valU after one or two years, given the crazy valuations of fintech companies, that alone could be worth more than the whole company itself,” said Karim Helal, an Egyptian investment banker and former CEO of smaller EFG competitor CI Capital.

HSBC sees fair value for EFG at 27.9 pounds per share.

FAB declined to comment beyond its statement on Feb. 9 in which it said the non-binding offer represents an attractive liquidity event and a compelling value proposition for EFG’s shareholders. EFG declined to comment on the bid beyond what is in its stock exchange disclosures.

EFG has appointed Goldman Sachs to advise on FAB’s offer and will allow FAB to conduct due diligence. After completion and regulatory approvals, a mandatory tender offer will be made.

FAB already owns banking licenses in Egypt – its own subsidiary and the Egyptian unit of Lebanon’s Bank Audi, which it acquired last year.

Others have previously targeted stakes in EFG and failed. In 2014, Egypt’s Beltone Financial and billionaire Naguib Sawiris bid for 20% of EFG, offering 16 pounds a share, or $2.24 at the time, which EFG said undervalued it by 30%. QInvest, backed by the Qatari government, tried in 2013 to create a joint venture with EFG Hermes, in which it would then own 60%.

Egypt’s regulator cited QInvest’s lack of experience as the main reason for refusing to approve the joint venture deal.

“EFG has built a fantastic organisation. Not just in Egypt, but very strong in the Gulf,” investment banker Helal said.

“They were on the Aramco IPO. That is a very big deal. They were up there with the big boys … the Rothschilds and the Goldmans,” he said, referring to the 2019 listing of oil giant Saudi Aramco (2222.SE), the world’s biggest flotation, which raised $29.4 billion.

Under Egyptian rules, a party seeking to buy more than a third of a listed company must make a mandatory tender offer for all remaining shares, lawyers say.

With its history deeply linked to the maturing of Egypt’s financial markets, many in the industry including Helal see EFG Hermes as a home-grown “national champion”.

“To see that acquired by anybody – I don’t mean FAB or with due respect to Abu Dhabi and everything, I don’t care who it is, by any non-Egyptian entity, as an Egyptian it kind of makes me a bit sad,” Helal said.

Reporting by Yousef Saba in Dubai and Patrick Werr in Cairo; Additional reporting by Saeed Azhar in Dubai; Editing by Susan Fenton