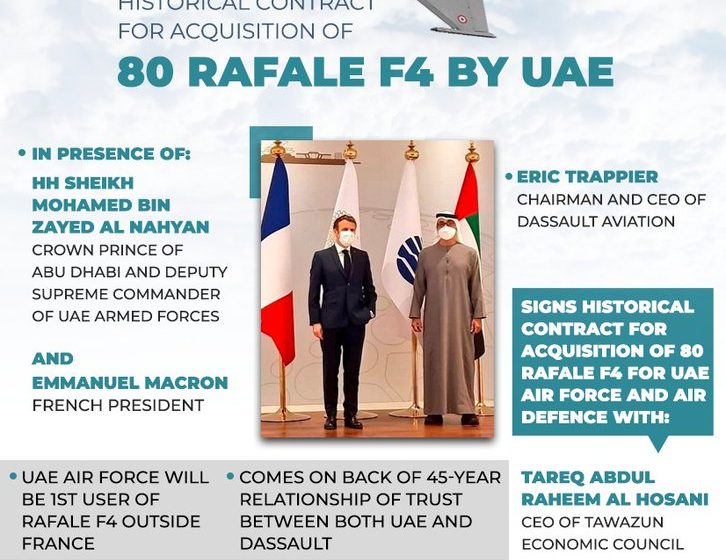 After years of negotiations, the UAE has signed a deal with the French aircraft manufacturer Dassault Aviation in December last year and released the first payment towards purchase of 80 Rafale F-4 fighters and 12 military helicopters costing around $19 billion.

While $16.28 billion is for the aircraft, the remaining $2.19 billion is for weapons and the deliveries are due to run between 2027 and 2031. The agreement between France and the UAE is the largest ever export order for the Rafale.

At the end of 2021, Dassault had 86 Rafales in its backlog, of which 46 were for export customers including Egypt, Greece and India. Greece has already placed a follow-on order for six additional aircraft, which will be delivered in 2024, while Indonesia has tentatively committed to a 42-unit deal this year so far.

The Rafale F4, for which the Emirates Air Force will be the first user outside France, will provide the Emirates armed forces with a tool capable of guaranteeing sovereignty and operational independence. This contract is the result of total mobilization by Dassault Aviation alongside the Emirates Air Force and comes on the back of a more than 45-year long relationship of trust between the UAE Dassault Aviation, built on the Mirage family of fighter aircraft, notably the Mirage 2000-9, the modernization of which began two years ago.

The deal was seen as historic, and also significant to regional stability, after Qatar bought 36 of the planes, and Egypt which ordered 24 in 2015 and 30 earlier this year.

Dassault see this as the largest ever contract obtained by the French combat aeronautics industry, and also excellent news for France and for its aeronautical industry, for the entire ecosystem of 400 companies, those contribute to the Rafale assembly lines.

This contract also testifies to the historical and privileged relationship between Dassault Aviation and the UAE Air Force & Air Defence (UAE AF & AD) since its creation and reaffirms the Emirates’ satisfaction with Dassault Aviation fighters as demonstrated by the modernization of the Mirage 2000-9.

Dassault Aviation Chairman and Chief Executive Officer Eric Trappier said that the Rafale showed, through its proven operational qualities and its export success, that it is a real ‘game changer’ on the global geopolitical scene and an undisputed instrument for independence and sovereignty.

“Dassault Aviation is fully committed to supporting the UAE in its sovereign power, its strategic challenges and its ambitious vision of the future,” he said.

The December agreement was signed by Eric Trappier and Tareq Abdul Raheem Al Hosani, CEO of Tawazun Economic Council and in charge of security and defense acquisitions, in the presence of the French President Emmanuel Macron, and the Abu Dhabi Crown Prince Sheikh Mohamed bin Zayed Al Nahyan.

By its exceptional scope, the deal attests to Dassault Aviation’s technological expertise and the Rafale’s unique operational qualities.