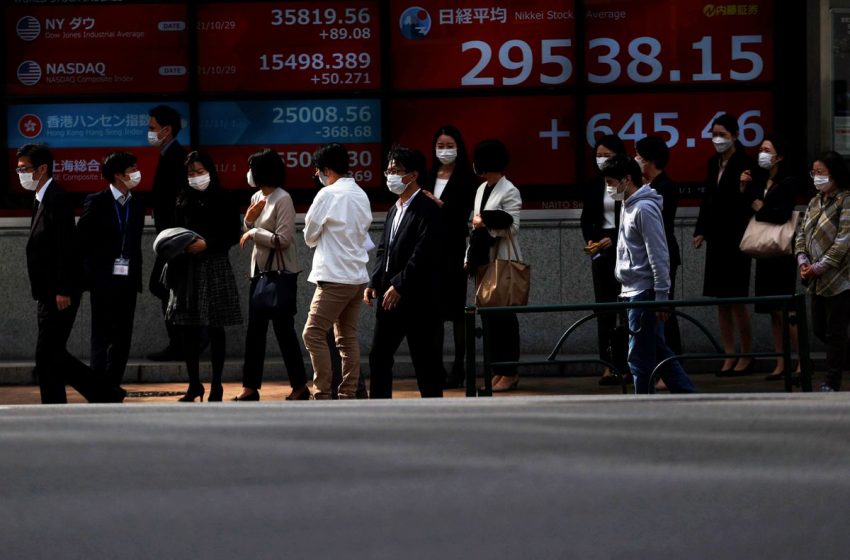 SHANGHAI, Jan 6 (Reuters) – Asian share markets slumped on Thursday and European stocks were poised for a lower open after Federal Reserve meeting minutes pointed to a faster-than-expected rise in U.S. interest rates due to concerns about persistent inflation.

U.S. stocks sold off overnight after investors interpreted minutes from the Fed’s December meeting as being more hawkish than expected.

Fed policymakers said a “very tight” job market and unabated inflation might require it to raise interest rates sooner than expected and begin reducing its overall asset holdings as a second brake on the economy, the minutes showed.

“Of course if you’re pricing in a faster price pace of Fed tapering, that doesn’t translate well for Asian asset classes so you are likely going to see more outflows from the region, which will translate both into weaker equities and also depreciatory pressures on the FX front,” said Carlos Casanova, senior economist for Asia at Union Bancaire Privee in Hong Kong.

Worries over higher U.S. rates combined with growing concerns about the rapid spread of the Omicron coronavirus variant to weigh on riskier assets. read more

The minutes showed Fed officials were uniformly concerned about the pace of price increases that promised to persist, alongside global supply bottlenecks “well into” 2022. read more

The Nasdaq (.IXIC) plunged more than 3% on Wednesday in its biggest one-day percentage drop since February and the S&P 500 (.SPX) fell the most since Nov. 26, when news of the Omicron variant first hit global markets.

“There is a risk that the Fed might fall into the trap of making policy errors because they do have to perhaps hike interest rates faster than expected, but given the timing of their exit from quantitative easing, it could coincide with a slowdown in the economic cycle and also a decline in inflation on base effects,” said Casanova.

Higher U.S. yields continued to support a firm dollar , though the currency gave back some ground against the yen after touching five-year highs earlier this week, falling 0.21% to 115.86.

In commodity markets, global benchmark Brent crude fell 0.91% to $79.14 per barrel and U.S. crude dipped 0.89% to $80.08 a barrel after OPEC+ producers agreed to boost production and on a surge in U.S. stockpiles. read more

Spot gold was down 0.38% at $1,802.91 per ounce, with higher U.S. bond yields dulling the lustre of the precious metal.Reporting by Andrew Galbraith; Editing by Ana Nicolaci da Costa