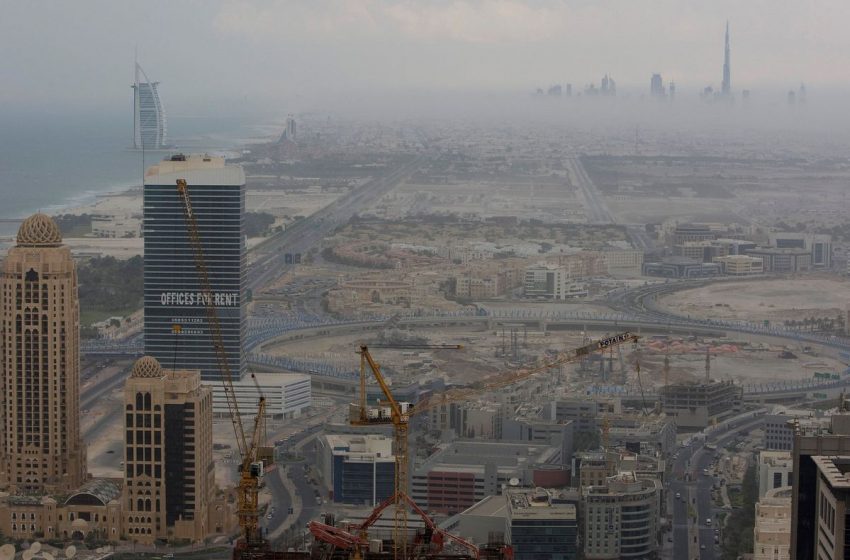 An early evening view of the Burj Dubai (top right) and Burj Al Arab (back left) with construction work in the foreground, late November 15, 2008. REUTERS/Steve Crisp

Strong demand is likely to make Dubai house prices rise more sharply this year than previously thought, although plentiful supply is likely to ensure the city state stays a buyer’s market for a few more years, a Reuters survey found.

The Gulf region’s trade and tourism hub and host of World Expo, Dubai has experienced a boom in property deals. The sale values of real estate transactions until November last year were the highest yearly sales figures since 2014, Dubai Land Department data shows.

A Reuters survey of 12 analysts taken Feb. 9-23 found expectations of continued strength, with Dubai housing prices forecast to rise at a faster pace than predicted three months ago.

It found average home prices were expected to climb 7.5% this year and 5.5% next, compared to 5.0% each in the November survey.

“While improvements in the overall economy, along with the continued arrival of new residents, look set to support modest rises in residential sales prices and rents, a strong supply pipeline will likely limit the extent of market-wide uplifts,” Chris Hobden at Chestertons MENA said.

According to most analysts who answered an extra question, the Dubai property market will remain a buyer’s market for at least the next couple of years. This is in sharp contrast to most residential markets around the world experiencing runaway price rises, particularly during the pandemic.

“There is still a large (amount) of supply that is likely to be completed across Dubai in the next two to three years. This is likely to favour buyers going forward,” said Swapnil Pillai at Savills.

An oversupply of homes saddled the real estate sector for several years and will keep Dubai affordable for a while yet. On an affordability scale of 1 to 10 where 1 is extremely cheap and 10 is extremely expensive, analysts returned a median of 5.

“Given that Dubai continues to be a buyer’s market, developers will refrain from increasing prices substantially. Therefore, affordability may continue for some years,” said Anuj Puri, chairman at ANAROCK Property Consultants.

When asked what will happen to affordability over the next two-to-three years, there was a split between all 12 analysts. While six said it would improve, six expected it to worsen, indicating uncertainty around market direction.

For now increasing demand, especially from foreign investors, high immigration, and a sharp upturn in the economy will be the most significant upside risks, according to respondents to an extra question.

However, they also cited downside risks including higher interest rates, a depleting stock of affordable homes, and an economic slowdown because of political instability in the region and around the globe.

(For other stories from the Reuters quarterly housing market polls: read more )