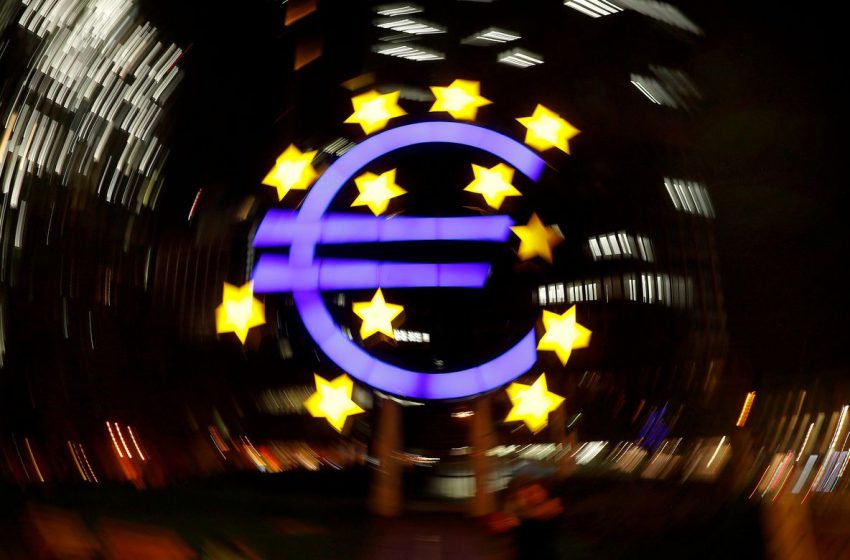 BENGALURU, Jan 19 (Reuters) – Euro zone inflation is set to burn hotter throughout 2022 than expected a month ago, according to economists polled by Reuters, which could pressure the European Central Bank to tighten policy once the Omicron wave of the pandemic passes.

For the near-term, the virus remains a wild card, with a wide range of forecasts on economic growth in the Jan 11-18 poll and the median forecast for the current quarter chopped to 0.5% from 0.7%.

More than two-thirds of economists polled said the Omicron variant will have a milder economic impact than Delta, mainly because there are fewer restrictions in place now.

Forecasts for inflation this year have risen for the seventh consecutive survey — up by 0.6 percentage points each for the first and second quarters to 4.1% and 3.7% respectively, well above the ECB’s 2.0% target.

“In the short term, we see some downside on growth stemming from virus containment measures,” said Bas van Geffen, senior macro strategist at Rabobank, referring to the current quarter.

“In the longer term, we mainly expect slower growth as supply-driven inflation erodes households’ real spending power, which weighs on consumption and euro zone GDP. Omicron or other strains could further aggravate this negative impact of cost-push inflation,” he said.

Like in much of the rest of the world, inflation is soaring in the euro zone but it most likely peaked in the last quarter.

Annual consumer price rises hit a record high of 5% last month. But the ECB has resisted calls for tighter policy, sticking to the view that price pressures will ease this year.

So far, the poll results back that view, with inflation set to dip to 1.9%, just below its target, in the fourth quarter and averaging below 2.0% from then on.

So nearly every economist expected policy interest rates to hold steady well into next year.

Of the 39 economists who had a rate forecast for 2023, those who see a rate hike were evenly split on whether it will happen in the first or second half of the year.

A like-for-like analysis showed slightly more analysts now expect higher rates by the first half of next year compared to the December poll. Only one expects rates to rise this year.

That stands in sharp contrast to the U.S. Federal Reserve. Facing the highest inflation in 40 years, it is set to raise its federal funds rate from near-zero as soon as March.

A few economists say the ECB also should move soon.

“Zero and negative interest rates respectively are pure emergency measures. With inflation above target and inflation risks tilted to the upside as well as a tight labour market and a closed output gap there is no reason to keep rates that low,” said Jörg Angelé, senior economist, Bantleon Bank.

“It would be better for the ECB to start early reversing its ultraloose monetary policy in small steps. If it waits too long, it risks being forced to pull the brakes and end up with a recession.”

Asked when the ECB will end its Asset Purchase Programe, about 85% of respondents, 28 of 33, said by the end of the first half of 2023. The Fed is already hinting it will soon start offloading its holdings of bonds.

Growth in Germany, the largest economy, was downgraded to 4.0% from 4.4% in the last quarterly poll in October, according to the median forecast. Expected growth in France eased slightly to 3.7% from 3.9%, while Italy’s forecast held steady at 4.2%.

The three biggest economies of the bloc saw a significant upgrade in annual inflation forecasts for this year.

Euro zone jobless rate forecast for this year edged down slightly to 7.2% from 7.3% in the last poll, while prediction for next year remained steady at 7.0%.

(For other stories from the Reuters global economic poll: read more )Reporting by Swathi Nair; Polling by Arsh Mogre and Sujith Pai in Bengaluru; Editing by David Gregorio