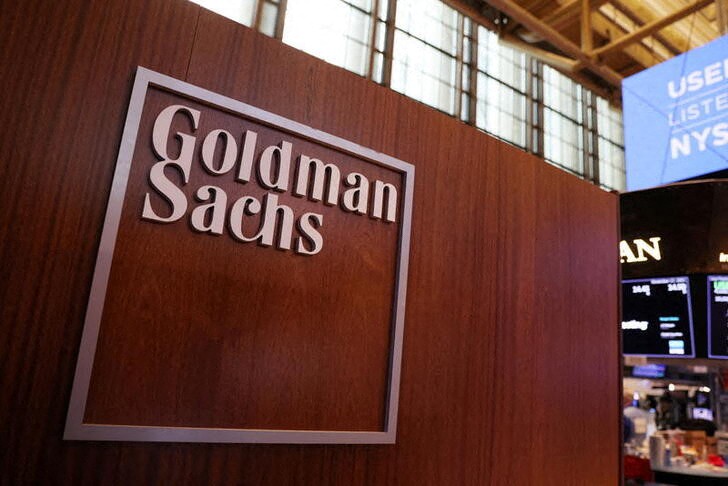 The share decline put Goldman on course for its worst single-day showing since June 2020, shedding about $10 billion off its market valuation since Friday’s close, although it recovered to trade down 6.5% towards the close.

Bank earnings in the fourth quarter have taken a hit from lower trading volumes as the Federal Reserve slowed the pace of its asset purchases after 18 months of pumping liquidity into capital markets to ease the impact of the COVID-19 pandemic.

With its capital markets focus, Goldman had been one of the main beneficiaries of market volatility since March 2020, enabling its fixed income and equities traders to enjoy their best period since the 2007-09 financial crisis.

However, revenue from global markets fell 7% in the fourth quarter to nearly $4 billion, owing to declines in both equities and fixed income trading revenues compared with a year ago.

“Goldman Sachs had an impressive record year, but a thud of a quarter,” said Viola Risk Advisers analyst David Hendler.

Since taking over the reins from Lloyd Blankfein in 2018, Goldman’s Chief Executive David Solomon has looked to diversify the bank’s revenue with an aim to focus more on predictable revenue streams like consumer banking, wealth and asset management. The strategy aims to reduce the bank’s reliance on unpredictable capital markets-focused businesses.

However, the bank’s global markets division, which houses its trading businesses, still accounted for more than a third of its revenues last year.

Aside from the trading slowdown, Goldman was also handicapped by a 23% rise in operating expenses, mainly reflecting higher compensation and benefits costs.

Wage inflation has crimped banks’ profits as top Wall Street banks have raised salaries for junior bankers, in particular, over the past year to attract and retain top talent.

Oppenheimer analyst Chris Kotowski expressed surprise that Goldman’s compensation ratio, which measures the proportion of a bank’s revenues set aside to pay staff, had risen during the quarter.

“This is the first time we’ve been covering the stock where the ratio increased 3Q to 4Q,” he said.

Goldman has traditionally been one of the best-paying banks.

“Our philosophy remains to pay for performance, and we are committed to rewarding top talent in a competitive labor environment,” Chief Financial Officer Denis Coleman told analysts on a conference call.

For the year as a whole, Goldman’s compensation ratio was 200 basis points lower at 30% than it was the year previously.

Like its rivals, Goldman’s trading slowdown overshadowed a 45% jump in investment banking revenue to $3.8 billion as its top rainmakers raked in record fees from advising on some of the largest mergers and initial public offerings.

Solomon acknowledged last year was exceptional in terms of client’s trading activity but said he anticipates more market volatility than usual in 2022.

“Activity levels, given we’re in a very, very unusual macro environment, are going to continue to be reasonable as we start into this year,” he told analysts. “You’ve still got a lot of volatility around the pandemic.”

The bank expects to hold on to market share gains made by its trading business even as the market environment returns to normal, executives said.

Goldman’s profit fell to $3.8 billion in the quarter $4.4 billion a year earlier.

Earnings per share fell to $10.81 from $12.08 a year earlier. Analysts on average had expected a profit of $11.76 per share, according to Refinitiv data. Additional reporting by Niket Nishant in Bengaluru and Matt Scuffham in New York; Writing by Anirban Sen and Matt Scuffham; Editing by Arun Koyyur and Nick Zieminski