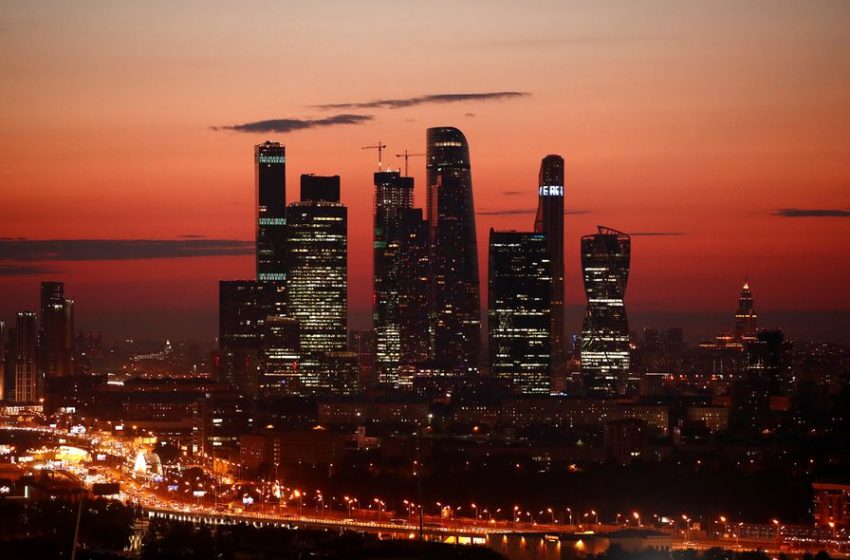 The skyscrapers of the Moscow International Business Centre, also known as “Moskva-City”, are seen just after sunset in Moscow, Russia July 12, 2018. REUTERS/Christian Hartmann

So far global companies, banks and investors have announced that they have exposure in some form to Russia of more than $110 billion. That number could rise. Data from research firm Morningstar, meanwhile, shows exposure from international funds to the tune of $60 billion in stocks and bonds.

Here is a breakdown of what we know so far as Western sanctions grip Russia’s economy in response to its invasion of Ukraine.:

STOCKS AND BONDS – ESTIMATED $60 BLN FROM MUTUAL FUNDS AND ETF

Overseas investors in Russia have tens of billions invested in the country’s stocks and bonds, according to Morningstar data. U.S. asset managers like Capital Group, Black rock and Vanguard disclosed large exposures, according to the most recent portfolio information available to the research firm. read more

Disclosures cover a period starting September 2021 through to Feb. 25 this year. They total over $60 billion when considering the top 100 open-end funds and exchange-traded funds worldwide in terms of estimated U.S. dollar exposure to Russian securities, according to Morningstar data. read more

Of these, some of the biggest were Capital Group Companies Inc, one of the world’s largest investment management companies, Vanguard and PIMCO and BlackRock. read more

Bank of International Settlements data show that foreign banks have exposure to the tune of $120 billion to Russia. In Europe, Italian and French banks have the largest Russian exposure, representing just over $25 billion each at the end of September, the data says. The exposure of U.S. banks totals $14.7 billion, according to BIS data.

Of those that have announced exposure:

Societe Generale, which controls Russian bank Rosbank, had 18.6 billion euros ($20.5 billion) of overall exposure to Russia at the end of last year – or 1.7% of the group total.

As a comparison, Goldman Sachs Group Inc GS.N reported in a filing last month $293 million in net exposure to Russia, as well as a total of $414 million of market exposure as of December 2021.

Exxon Mobil (XOM.N) on Tuesday said it would exit Russia oil and gas operations that it has valued at more than $4 billion and halt new investment as a result of Moscow’s invasion of Ukraine. read more

BP announced it was abandoning its stake in Russian oil giant Rosneft. Rosneft accounts for around half of BP’s oil and gas reserves and a third of its production and divesting the 19.75% stake will result in charges of up to $25 billion, the British company said. read more

Shell (SHEL.L) will exit all its Russian operations. Shell said the decision to exit Russian joint ventures will lead to impairments. Shell had around $3 billion in non-current assets in these ventures in Russia at the end of 2021, it said. read more

Norway’s sovereign wealth fund, the world’s largest, has written off the value off the roughly $3 billion in assets it held in Russia. The fund held investments in Russia worth some 27 billion crowns ($3.0 billion) at the end of 2021, equivalent to 0.2% of its total value, but now likely worth 2.5 billion crowns. The fund’s Russian assets consisted of shares in 51 companies at the end of 2021. The most valuable stakes were in gas producer Gazprom, bank Sberbank (SBER.MM) and oil firm Lukoil (LKOH.MM), which together accounted for two-thirds of the total. read more

“They are pretty much written off,” CEO Nicolai Tangen later told Reuters on Thursday, after Norway’s government told the fund to sell the assets.

The California State Teachers’ Retirement System (CalSTRS), the second-largest U.S. pension fund, said on Wednesday the value of its holding in Russia as of the end of February was $171.5 million.

CalPERS, which manages the largest U.S. public pension fund, said late on Thursday that the fund had around $900 million of exposure to Russia, but no Russian debt. read more