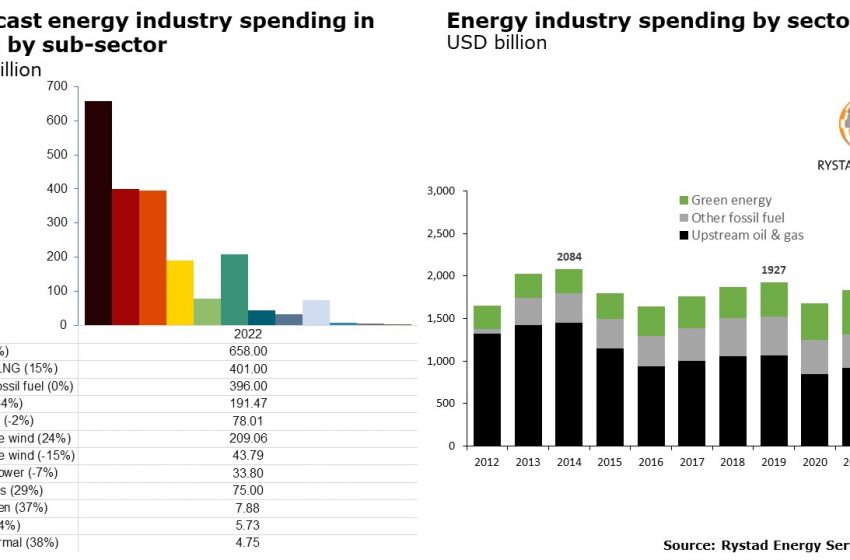 Global energy spending is set to reach a record $2.1 trillion in 2022, led by oil and gas as well as rising power prices and the EU reducing its reliance on Russian imports, global consultancy firm Rystad Energy said.

This is due to surging oil, gas and power prices together with the European Union (EU)’s goals of becoming less dependent on Russian supplies and post-Covid-19 pandemic inflation, the Rystad Energy research said.

A concern in energy markets has been that the ongoing war in Ukraine will derail the energy transition, but the latest data suggests that spending in green energies will grow faster than in the fossil fuel sector. Without the invasion, however, there would have been less growth in investments in oil and gas and the share of green energies in global energy spending would be slightly more than today’s 31%.

Upstream oil and gas spending is now projected to grow 16% – or $142 billion – compared to last year as oil and gas producers around the world up their investment budgets to increase output. For green energy in 2022, based on the current pipeline of projects, global capacity will grow at 250 GW within wind and solar, and lead green energy spending to grow by 24%, or $125 billion.

The research further noted that another important factor pushing energy spending to new highs was the global inflation of material prices, labor costs and shipping rates caused by the pandemic and the sanctions imposed on Russia.

Compared to 2020 levels, project costs in oil and gas have increased by between 10% and 20%, due largely to steel price rises and a tighter market among suppliers. Within renewables, lithium, nickel, copper and polysilicon – which are all important materials in battery and solar PV manufacture – have sent renewable project costs up by between 10% and 35% within the same timeframe.

Audun Martinsen, Head of Energy Service Research at Rystad Energy, said: “The world is now spending more on energy than ever before. The year 2014 was the last time we saw similar numbers. One can see a major shift in the amount of spending on green energy, which has increased, with a drop in expenditure on oil and gas. However, expenditure on other fossil fuels, such as coal, has remained constant.”

Breaking down the spending, capital and operational expenditures in 2022 by sub-sector reveals that it is still upstream oil that dominates the energy landscape, with $658 billion of spending and a growth of 16% to produce 99.6 million barrels per day (bpd) in liquids supply.

However, the gas and liquefied natural gas (LNG) sector also sees strong growth, with a 15% increase in spending, increasing output to 396 million cubic feet per day (MMcfd) from 390 MMcfd. Within green energies, it is solar, carbon capture and storage (CCS), hydrogen and geothermal that are growing the most, with between 40% and 60% growth. However, it is mainly solar utility scale and wind that add significant additional capacity of around 140 GW and 110 GW, respectively.

Sourcing fossil fuels from alternative providers to Russia is just a temporary solution as the EU harbors a clear goal of reducing the bloc’s dependence on fossil fuel energy in general. Green energy – through solar and wind power, coupled with hydrogen and CCS initiatives – will be key to improving the energy security but also delivering on member countries’ energy transition goals.

The European Commission in March unveiled a plan to make Europe independent of Russian gas and the Commission’s “REPowerEU” body has set out a framework to target a 45% share of renewables in primary energy by 2030. The framework demands an overall 1,600 GW of installed capacity in Europe by 2030.

In 2022, based on the current pipeline of projects, global capacity will grow at 250 GW, and lead to green energy spending to grow by 24%, or $125 billion, the research added.