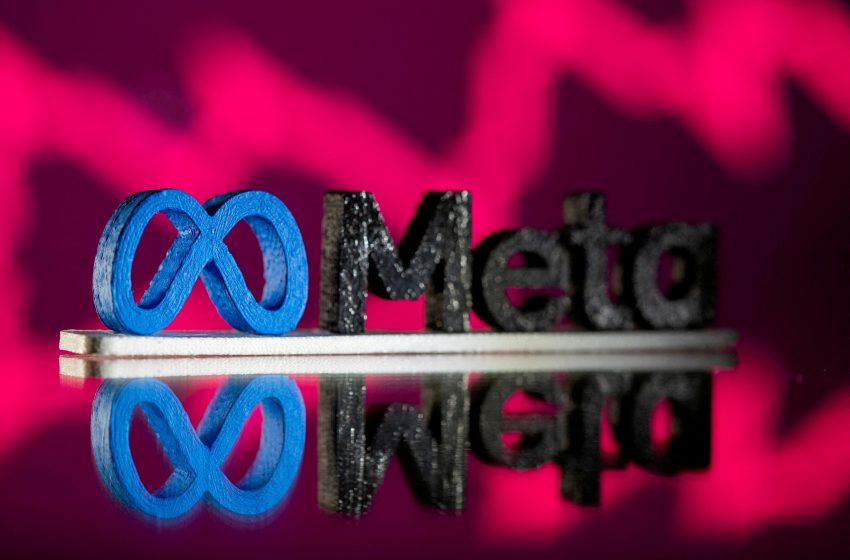 A 3D-printed Facebook’s new rebrand logo Meta is seen in front of displayed stock graph in this illustration taken on November 2, 2021. REUTERS/Dado Ruvic/Illustration

Facebook rebounded from a drop in users early this year and its parent Meta (FB.O) posted a profit ahead of Wall Street targets, defying low investor expectations with a quarterly report that sent shares up 20%.

Meta CEO Mark Zuckerberg also said that the company would scale back costs and was investing in artificial intelligence tools to improve recommendations and ads, a sign Meta is buckling down to make money while working on its long-term ambitions to build the metaverse.

Its stock rose 19% in after-hours trade on Wednesday.

Meta’s profit soundly beat Wall Street targets at $2.72 per share, compared with an average analyst estimate of $2.56, according to IBES data from Refinitiv. The earning beats were tempered by Meta recording its slowest revenue growth in a decade.

Facebook daily active users (DAU), a key metric for advertisers, were 1.96 billion, slightly higher than the estimate of 1.95 billion, according to IBES data from Refinitiv. Monthly active users came in at 2.94 billion, missing Wall Street estimates by 30 million.

Meta has lost about half of its value since the start of the year, after a dismal February earnings report when Facebook’s daily active users declined for the first time and it forecast a gloomy quarter, blaming ongoing factors including Apple’s (AAPL.O) privacy changes and increased competition from platforms like ByteDance’s TikTok. read more

“However, growth in monthly active users is slowing quickly. A few quarters ago it could count on developing markets to keep the growth engine going but it’s likely that even these high-growth opportunities are starting to dry up,” she said.

Total revenue, the bulk of which comes from ad sales, rose 7% to $27.91 billion in the first quarter, but missed analysts’ estimates of $28.20 billion, according to IBES data from Refinitiv.

In a conference call with analysts on Wednesday, Chief Financial Officer Dave Wehner cited factors including a slowdown in ecommerce after rapid growth during the COVID-19 pandemic, as well as a loss of revenue in Russia and reduced ad demand amid global economic uncertainty. On the call, Zuckerberg also echoed previous warnings about the challenges of engagement shifting toward features like its short video offering Reels, which generates less revenue than other ad formats.

A 3D-printed Facebook’s new rebrand logo Meta is seen in front of displayed stock graph in this illustration taken on November 2, 2021. REUTERS/Dado Ruvic/Illustration

Russia banned Facebook and Instagram in March, finding Meta guilty of “extremist activity” amid Moscow’s crackdown on social media during its invasion of Ukraine. Meta’s messaging service WhatsApp is not affected by the ban. Meta has also barred advertisers in Russia from creating and running ads anywhere in the world. read more

Meta forecast second-quarter revenue between $28 billion and $30 billion. Analysts on average were expecting current-quarter revenue of $30.63 billion. The company said its outlook reflected factors including the war in Ukraine and said it was monitoring the potential impact of regulatory moves in Europe.

“I think following Google, expectations were just for the absolute worst,” said Rick Meckler, partner at Cherry Lane Investments, a family investment office in New Vernon, New Jersey. “When they came in with EPS above estimates, I think people who had shorted the stock and those that had…given up on it decided to come back in.”

Meta lowered its expected 2022 total expenses to between $87 billion and $92 billion, down from its prior outlook of $90 billion to $95 billion.

Company executives said on the call that Meta was making significant investments in AI and machine learning to improve ad capabilities, as it grapples with the impact of Apple’s changes to its operating system, which have made it harder for brands to target and measure their ads on Facebook and Instagram.

But Zuckerberg also said that due to current business growth levels, Meta was slowing the pace of some longer-term investments in its AI infrastructure and Reality Labs hardware division, which is home to its augmented and virtual reality efforts

Meta saw quarterly revenue of $695 million for Reality Labs hardware division. It reported $3 billion in losses from operations from these metaverse ambitions.

Zuckerberg has warned it will take Meta billions of dollars and multiple years to realize its aims around building the metaverse, a futuristic idea of virtual environments where users can work, socialize and play.